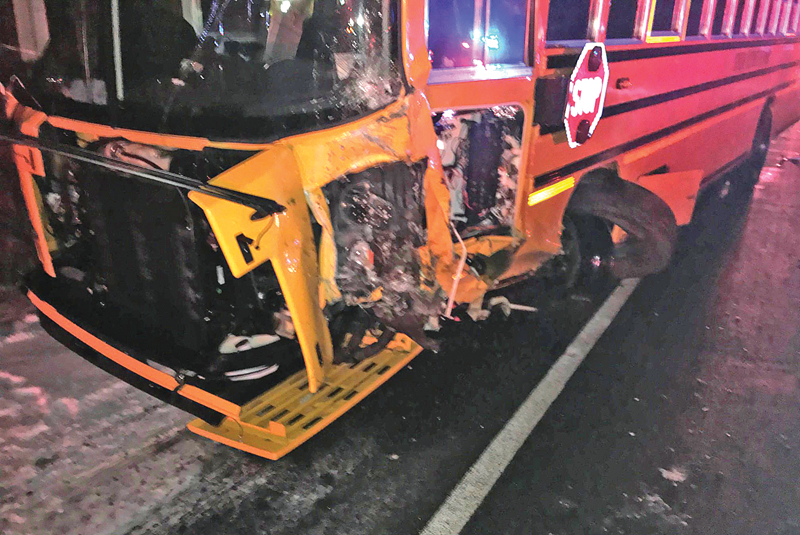 AN AMERY SCHOOL BUS showed damaged to the front driver side after it was struck by a Rice Lake man, who was pronounced dead at the scene. The bus was carrying the Amery girls’ basketball team when the crash occurred. —photo submitted

RICE LAKE — A Rice Lake woman is dead after the car she was driving crossed the centerline of Highway 48 west of Rice Lake and struck an Amery School Bus.

According to a news release from the Barron County Sheriff’s Department, they received a 911 call at 9:27 p.m. Tuesday, November 20th that a school bus vs. a car accident happened on State Highway 48 west of Rice Lake.

Deputies from the Barron County Sheriff’s Department along with ambulances from Chetek, Lakeview Medical Center, Gold Cross and Cumberland, officers from the City of Rice Lake and the City of Barron, fire departments from Rice Lake and Barron and the Life Link Helicopter responded to the scene.

Initial investigation shows the car driven by Joy Tew, 55, of Rice Lake crossed the centerline and struck an Amery School Bus carrying the Amery Girls Basketball team of 22 students, four coaches and the bus driver. All students and staff were treated and released at the scene, according to the report. The driver of the car, Tew, was pronounced deceased at the scene.

Barron County Sheriff Chris Fitzgerald praised the Amery girls’ team, coaches and parents who waited patiently with each other while everyone was checked out and reunited with their family.