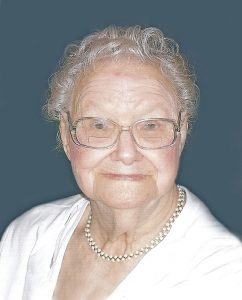 Rosemary Emily Hill (Bauch), age 82 of Downing WI, originally from Ashland, went home to be with her precious Lord and Savior on November 12, 2018, after a long battle with cancer.

Rosemary was an avid bingo player, along with the love of embroidery and her puzzles.

She was preceded in death by her husband Roy W. Hill in 1992, three great granddaughters, Theresa Kayser, Sierra James and Cynthia Dalbec.

Memorial service was held at 6:00 p.m. Monday, November 19, 2018 at Olson Funeral Home in Menomonie, WI, with Pastor Leroy Nelson officiating.  Visitation was held one hour prior to services at the funeral home on Monday.