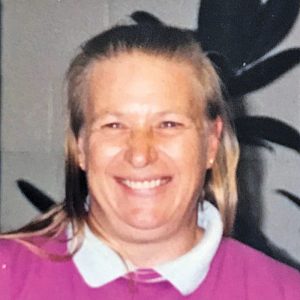 Rose Marie Hamm (Hutchinson), age 63, passed away unexpectedly in her home in Eau Claire on November 1, 2018. She was born in Alliance, Nebraska. Her brother, Robert, and her found a home with their adopted parents, Dwaine and LaDonna Hutchinson. The family moved to Wisconsin in 1970. She married Ken Maes on September 21, 1974 at St. John’s Catholic Church and had three children. After they divorced she moved to Eau Claire and remarried Tom Hamm. They were separated at the time of her death; no children resulted from that union.

She worked at Menards for many years. She also worked as a taxi cab driver later in life. She also loved doing many crafts including coloring, painting, jigsaw puzzles, leatherwork, and plastic canvas, to name a few. Even though she battled depression and failing health, she was kind and incredibly generous to those around her. She enjoyed talking to everyone, especially about her kids and grandkids, who were her proudest accomplishments.

She is survived by her brother, Robert Hutchinson, her ex-husband, Ken Maes, her (separated) husband, Tom Hamm, her children: Bob Maes, Dana McCuen (Maes), and Tina Marie Maes; her grandchildren: Morgan Gedatus, Dylan Maes, Megan McCuen, Theodore McCuen IV, and Zac McCuen; and her nephew and niece, Ethan and Elise. She was preceded in death by her parents, Dwaine and LaDonna Hutchinson.

There will be a private burial at St. John the Baptist’s Cemetery in Glenwood City this Saturday, November 9. The family is planning a celebration of life event in spring 2019. She will always be in our hearts.