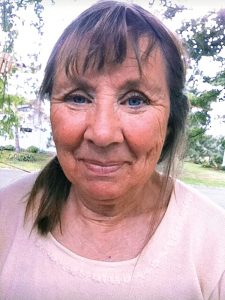 Sheila graduated from Mounds View High School and went on to Anoka-Ramsey Jr. Centennial and then earned her Bachelors of Science degree in Elementary Education from the University of Minnesota. Besides being an outstanding mother and homemaker, she was a teacher and substitute teacher at a variety of schools and childcare centers in the Clear Lake, Amery, Glenwood City, Boyceville, Baldwin, New Richmond area. She especially loved the special bond that grew when she took care of her grandchildren Emma, Elizabeth, and Juniper.

Sheila married Joel Curtis Schaffan on June 26, 1971. Though they divorced in 1998, they remained neighbors on the land they had purchased in 1972.

Sheila loved living in the country, raising her family and a variety of animals, including goats, horses, dogs, cats, rabbits, chickens, and even sheep and planting trees, growing gardens, and cutting firewood. She enjoyed being active, including dancing, ice skating, swimming, bicycling, and most of all walking. She greatly loved summers, which were spent going to parks, coordinating countless picnics at Glen Hills and Clear Lake, attending various fairs, picking berries, and raising animals.

Sheila had a love for knowledge and learning. She was an avid reader, especially of nonfiction. She wrote poetry and was passionate about history and language. She believed strongly in being informed politically and had spent the past several years fighting against the wind turbines planned near her home. She also loved to knit, making many sweaters, hats, and mittens for her family and entering exhibits in the county fair.

Sheila inspired her family to be gentle, lifelong learners, passionate about music and creativity, good stewards of resources, appreciative of nature, and to take care of themselves as well as the people and animals around them.

Sheila’s family extends their appreciation to Sacred Heart Hospital in Eau Claire for their compassionate care they provided Mom in her last week.