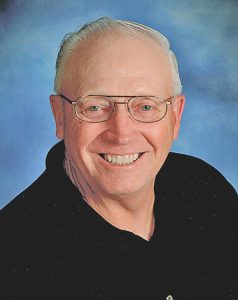 He was born November 23, 1941, in Sand Creek, the son of Joseph and Lillian (Peterson) Dressel. Loren graduated from Colfax Senior High School in 1959 and entered the U.S. Army. He served as a Military Police Officer until his honorable discharge in 1962.

He moved to Minneapolis, MN, where he attended Dunwoody College of Technology and obtained A.A.S. in Tool & Die. He worked for Uniroyal in Eau Claire and Fort Wayne, IN, for 31 years.

On June 29, 1963, Loren married Clara Kriegler at St. John the Baptist Catholic Church in Cooks Valley where they were long-time members.

Loren loved to attend sporting events for his children and grandchildren. His greatest love was cooking and feeding family & friends.

Loren was preceded in death by his parents; and his in-laws, Mike and Agnes Kriegler.

Mass of Christian Burial will be held at 11 a.m. Friday, November 9, 2018, at St. John the Baptist Catholic Church in Cooks Valley with Father Victor Feltes celebrating the Mass. Visitation will be held from 4-7 p.m. Thursday at Thompson Funeral Home in Bloomer and again Friday from 10-11 a.m. at church. A Christian Vigil Service will be held at 7 p.m. Thursday at the funeral home. Burial with Military Honors rendered by the Colfax American Legion will be private at a later date in the church cemetery.