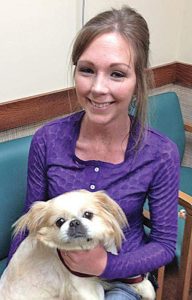 Amanda was born February 1, 1983 to George and Nona (Finder) Post at Menomonie, Wisconsin. She attended Glenwood City Schools and graduated with the Class of 2001. After high school, Amanda moved to Eau Claire where she worked for about 8 years at Walmart.

Amanda was diagnosed with a rare genetic disorder known as Fanconi’s Anemia in 2008. This condition caused her bone marrow to fail leading to serious blood disorders. She had a successful stem cell transplant in October 2009. Unfortunately, the Fanconi Anemia was still in her body causing cancer and other health issues. After a 10 year struggle, Amanda passed from this horrible condition.

Amanda enjoyed 4-H when she was younger. She also loved to travel and her favorite place to go was Aruba, but her first love was her Pekingese dogs.

She was preceded in death by her mother and her grandparents.

Visitation was on Saturday, November 3, 2018 from 9 a.m. until 11 a.m. Wilson Lutheran Church, Wilson, Wisconsin with a memorial service at 11. Burial was in Teegarden Cemetery, Knapp, Wisconsin.

Honorary bearers were her nephews Bentley and Brooks.