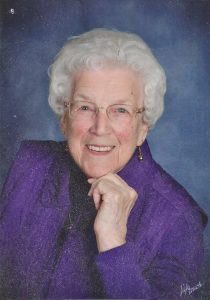 Betty was born November 25, 1924 to John Brown Washington and Helen Alice (Whittet) Sexton at the Redwood Falls Hospital in Redwood Falls, MN. Betty was the second of four daughters. They lived in the Redwood Falls area until the spring of 1939, when they moved the family to Viola, IL. Growing up Betty belonged to 4-H and played softball. She would help her mother with the housework and also doing chores outside in the barn.

Betty graduated high school in 1942 and stay to help her father at the gas station, where she pumped gas, kept the books, greased, changed oil and fixed tires. Betty married Paul Anderson in February of 1945. They farmed in Viola, IL and later moved to Alexis and North Henderson, IL. But in 1958 they picked up and moved to a farm in the Township of Emerald, WI. Betty worked on the farm and also at Glenhaven Nursing Home as a cook and then as the Dietary Manager, before moving on to the American Heritage Care Center in Hammond, WI. In 1980 they built a new home and moved north of Glenwood City, WI. In 1998 Betty moved into Glenwood City and eventually into Havenwood, Grand Oaks and then Glenhaven.

Betty is preceded in death by her husband Paul in 1986, parents, son Donald, sisters, brothers and sisters-in-law and childhood friends Bud (Lois) Wilshire.

Funeral services will be held 11:30 a.m. Friday, November 2, 2018 at Holy Cross Lutheran Church in Glenwood City with Reverend Jonathan Zielske officiating. Interment of cremains will be in the Greenwood Cemetery Emerald Township, WI. Friends may call at the church on Friday from 9:30 to 11:30 a.m.. Local arrangements by the Anderson Funeral Home in Glenwood City, WI.