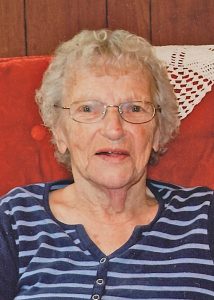 Edna was born on February 14, 1919, to Myron and Sophie (Mattison) Brewer. She was raised in the Town of Wilson and attended Plainview School. Edna was baptized and confirmed at Our Saviors Church in the Township of Sand Creek.

She married Gordon Flatland on May 2, 1936. They farmed in the Township of Otter Creek most of their married life. Edna also worked as a nurse’s aide at the Colfax Nursing Home for nearly 20 years, which she really enjoyed.

She was preceded in death by her husband, Gordon in 1983; parents; sister, Violet; brother, Vernon (Minnie); and daughter-in-law, Carol.

In lieu of flowers, memorials may be given to New Hope Lutheran Church.

Funeral Services were held at 11 a.m. on Friday, October 26, 2018, at New Hope Lutheran Church, E9085 County Road V, New Auburn, WI, with Pastor Michael Sparby officiating. Visitation was from 5 to 7 p.m. on Thursday, October 25, 2018, at Sampson Funeral Home, 1017 E. Railroad Ave. in Colfax. Burial was in Our Saviors Lutheran Cemetery in the Township of Sand Creek.