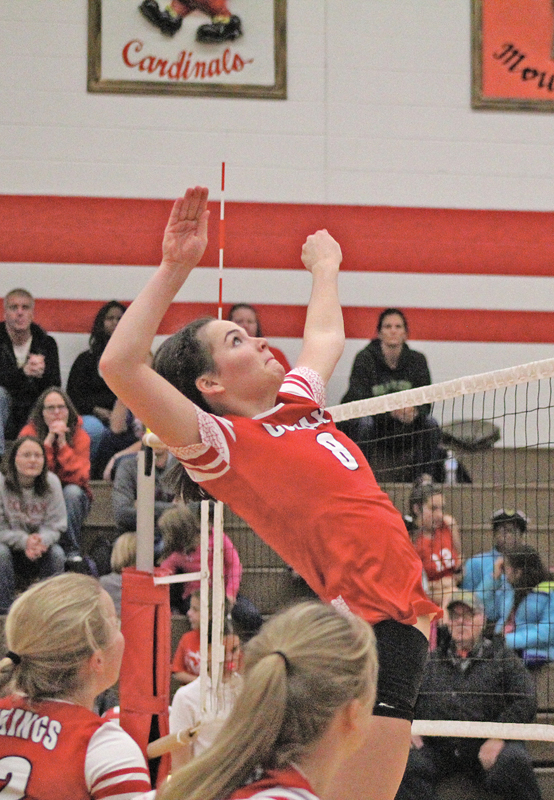 FOR THE KILL— Samantha Pretasky(#8) puts down her eighth kill of the night against the Blue Devils in the third set. —photo by Amber Hayden

SPRING VALLEY — The Lady Vikings’ volleyball team earned the right to call themselves the Dunn-St. Croix conference champions for the sixth straight year after finishing with an unblemished 8-0 conference record following three-set sweeps over Spring Valley and Plum City this past week.

Colfax then wrapped up the regular season at the Altoona tournament Saturday, October 13, going 3-2 to take fourth and improve to 25-7 overall for the 2018 season.

With the conference and regular season behind them, Colfax head Coach Pam Meredith is hoping her charges will turn their attention and concentration to the WIAA tournament.

“Maybe we can focus on making it a little further in playoffs than we have before,” Meredith commented. “We host a sectional final and we want to be in it.”

But before the Vikings could train their sights on the upcoming tournament series they had a busy final week of regular season play to compete.

Colfax traveled to Spring Valley last Monday evening, October 8 in order to make up the September 20 game against the Cardinals that had been postponed. The Vikings came away with a win in three sets and then three days later they did the same in a home match against Plum City.

The Lady Vikings, who received an honorable mention in the latest state coaches poll on Wissports.net, will take a much needed respite as they received a first-round bye and the top seed in the WIAA Division 3 regional competition that got underway last evening (Tuesday, October 16). Colfax will host Thursday’s semifinal match against the winner of the Mondovi-Durand match.

The Lady Vikes made the trip back to Spring Valley on October 8 in order to make up the game that was postponed to due the  due to severe weather that damaged the Spring Valley school back on September 20.

Samantha Pretasky led the offense in attacking with 13 kills against the Cardinals, Savannah Henricks along with Rachel Scharlau each added on eight and Kameri Meredith tacked on seven kills for the Vikings. 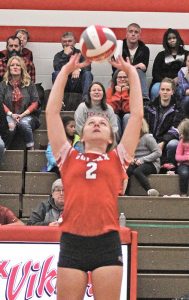 SET UP— Taylor Irwin (#2) sets up the ball for the Vikings during their second set against Plum City.
—photo by Amber Hayden

The Lady Vikes had a solid night from the service line with 74 total serves and only nine errors. Alyssa Dachel had three aces in her 22 serves against Spring Valley, Kameri Meredith contributed two, and junior Taylor Irwin added one ace.

Dachel, Colfax’s senior libero, also led the charge from the back row, digging deep for 12 digs. Irwin and Meredith tacked on ten a piece and Rachel Scharlau contributed five digs of her own.

Jozie Buchanan had a solid night for the Colfax Vikings as she put up 25 assists, seven kills, one ace and eight digs against the Spring Valley Cardinals.

Thursday evening, October 11, the Lady Vikes took on the winless Blue Devils of Plum City in the teams final conference match of the season and earned themselves a perfect 8-0 conference season thanks to a three-set sweep.

The stress was off Colfax as they took the match against Plum City in three by scores of 25-4 in the first, which got started off by an eight serve run by Alyssa Dachel. The second set score was 25-4 and third was 25-13.

“Their (Plum City) is a group that is still developing their program, and it took some of the stress off that was nice for us,” coach Meredith stated.

Samantha Pretasky and Kameri Meredith led the Vikings on offense putting up eight kills a piece, Savannah Henricks and Jozie Buchanan each had six kills and Rachel Scharlau added in five kills of her own.

Alyssa Dachel had a solid night against Plum City from the service line with eight aces, as well as five digs, one assist and 12 receptions.

“I tell you what, it takes a little bit of luck and a lot of skill and we did it. I’m so thrilled,” coach Meredith commented afterwards on the Vikings earning their sixth consecutive Dunn-St. Croix championship.

Leading the team on assists was Taylor Irwin putting up 18 against the Blue Devils and Jozie Buchanan contributed 12 more.

The Blue Devils took advantage during the third set against Colfax, putting up 13 points in the third as the Vikings struggled to communicate. But a tipped ball by Josie Steinke pushed the score to 25-13 and ending the match.

“That was exciting,” stated Meredith, “We knew we had a good group of girls coming back this year and we pushed them and focused on the conference championship.”

With the win over Plum City, Colfax secured the conference’s top spot for the sixth straight season and a number one seed for the WIAA volleyball tournament. 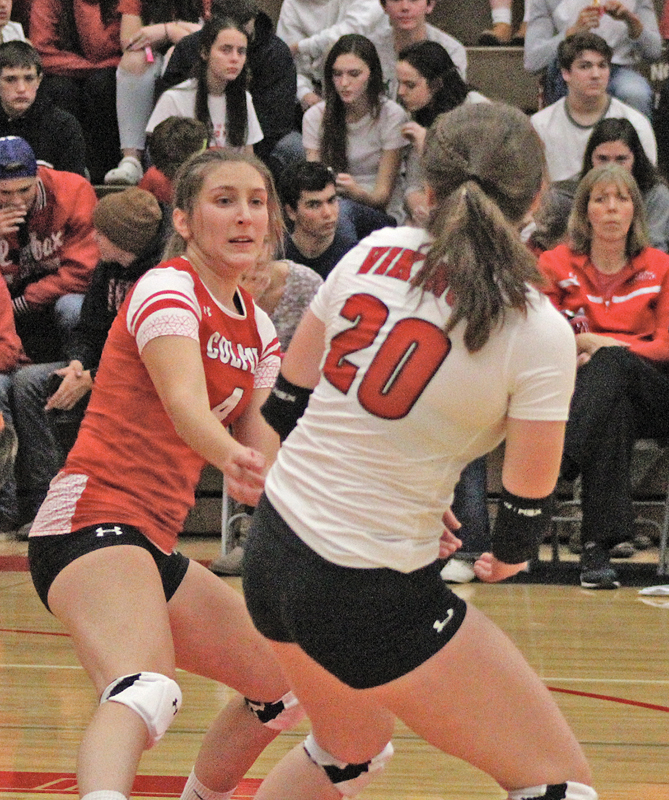 MISSED CALL— Alyssa Dachel (#20) and Kali Risler (#4) step out of each other’s way after missing to call the ball scoring another point for Plum City. —photo by Amber Hayden

The Lady Vikings finished their busy week off in Altoona for one last invitational on Saturday, October 13.

“All in all it was a pretty good day for us. We started out way too slow and sluggish against North and found ourselves trying to claw back but couldn’t get the scoreboard to flip,” stated coach Meredith.

Leading the offense against EC North with six kills a piece were Samantha Pretasky and Kameri Meredith, Rachel Scharlau tacked on five and Jozie Buchanan contributed three. The Vikings dropped the ball in two sets against North by scores of 22-25 and 23-25.

Buchanan also led the way on defense with 12 digs and 12 assists against the Huskies.

Coming back in the second game Colfax defeated Athens in two by scores of 27-25 and 25-22.

The Lady Vikings continued their win streak against EC Memorial and Elk Mound taking the wins in two by scores of 25-18 and 26-24 against Memorial and 25-20 and 25-18 against Elk Mound.

Colfax took it to the Mounders once more with Jozie Buchanan putting up two aces and Scharlau and Meredith each contributing one ace a piece.

Alyssa Dachel led the defense with 11 digs against the Mounders, Meredith and Taylor Irwin each dug deep for six a piece and Jozie Buchanan had four.

“Grantsburg is the team that will more than likely come out of the other (side of the) sectional,” explained coach Meredith, “And if we continue to play well we could meet up with them in the sectional final.”

That sectional championship match is to be played on the Vikings home floor on Saturday, October 27.

The Vikings suffered a close loss to Grantsburg with unforced hitting errors and footwork on defense being the downfall. After dropping the first set 25-13, Colfax evened the match with a thrilling 29-27 win in set two. But Grantsburg nipped the Vikings 15-13 in game three for the victory.

Taylor Irwin came out strong with 12 assists against the Pirates, as well as five digs, two aces and two kills.

The offense was led by Kameri Meredith with seven digs and Samantha Pretasky and Jozie Buchanan each had give kills a piece. 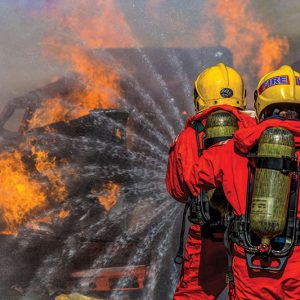