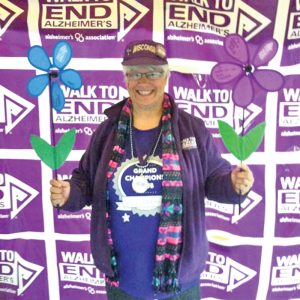 COLFAX  —  For Colfax resident Wendy Lausted, fund raising and completing the Walk to End Alzheimer’s every year for the past 15 years is personal.

Several of Wendy and David’s cousins also have been diagnosed with the disease.

“For all of my loved ones who have this disease, I’m going to keep walking … I have to keep getting donations and doing fund raising. It’s my job,” Wendy said.

For the past few years, the Alzheimer’s walk event has been held at Zorn Arena in Eau Claire. The Zorn  Arena Walk to End Alzheimer’s, held this year on September 29, is a combination of walks that were previously held in Menomonie, Chippewa Falls and Eau Claire.

The Walk to End Alzheimer’s is usually about two miles.

This year’s walk at Zorn Arena had 452 participants and 57 teams.

When Wendy Lausted first started the Alzheimer’s walk in 2003, she was part of the Colfax Health and Rehabilitation Center’s team — known as Area Nursing Home at that time — but she also participated as an individual walker.

Even during her first time doing the Alzheimer’s walk, Wendy was able to raise an impressive number of donations.

“When I first found out my mother-in-law had the disease, she was up at the nursing home, and we went to see her. I spent the whole day with her. I kept on talking to her, and she’d hold my hand, and at one point, she asked me, ‘Why are you crying?’ And I said, ‘You’re my inspiration,” Wendy recalled.

“When she died, my heart was broken. We spent a lot of time together, shopping and all of the other things we did,” she said.

Over the years, Wendy has been a top fund raiser in the Walk to End Alzheimer’s a number of times. She has been the “grand champion” fund raiser four times and has been in the Champion’s Club four times. For fund raising, she has been in first place, second place and third place over various years. She has won the Spirit Award. She has received plaques and medals and tee-shirts and jackets.

“Sometimes I think I need a bigger closet,” she said.

Although Wendy had been considering discontinuing the Alzheimer’s walk after this year, she has decided to keep going for as long as she can.

“I’m going to keep on doing it until I get up there in age, and I can’t do it anymore,” Wendy said.

So far this year, Wendy says she has raised over $1,000 for the Alzheimer’s Association.

The Walk to End Alzheimer’s makes use of flowers in different colors that are like big pinwheels. The purple flowers, Wendy noted, are for those who have already died from the disease. People write the name of the person on the flower for whom they are walking in memory of or in honor of.

“I’m looking forward to seeing all of my friends I haven’t seen since last year,” she said, in anticipation of the 2018 Walk to End Alzheimer’s.

“We laugh. We cry. We have a wonderful time. We have tears. And joy. We give each other hugs. We say a prayer,” Wendy said.

The different teams that participate in the event have different tee-shirts, and individuals also do some creative costuming for the event.

A friend gave Wendy a purple feather boa to wear on her walk.

Many different volunteers are on hand to help with the Alzheimer’s walk to hand out shirts and water and to register the walkers.

“It’s the hardest thing to see people when they don’t know you anymore … I’m going to keep on doing this. I’m not going to stop until we find a cure,” she said. 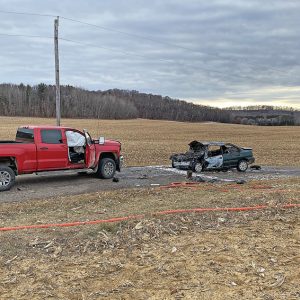