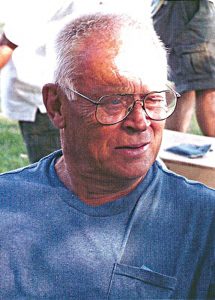 Rollie was born on May 6, 1935, in Wheeler, WI, to Carl R. and Alvilda C. (Erickson) Scheidecker. He graduated from Colfax High School with the Class of 1953, and honorably served his country for four years in the Navy.

On April 11, 1959, Rollie married Arlene Edwards at Colfax Lutheran Church, and together they had three children. Rollie worked at Armour and Co. in South St. Paul and Eau Claire for 30 years. He was also part owner of South St. Paul Landscaping and Scheidecker Pit Pumping in Colfax. Rollie enjoyed playing cards, gardening and making wine.

He was preceded in death by his parents; great-granddaughter, Haley Briggs; and siblings, Allene (Stanley) Mickleson and Richard (Shirley) Scheidecker

Funeral services will be at 11 a.m. on Thursday, October 4, 2018, at Colfax Lutheran Church, 601 River St. in Colfax, with Pastor Leslie Walck officiating. Visitation will be from 4 to 8 pm, on Wednesday, October 3, 2018, at Sampson Funeral Home, 1017 E. Railroad Ave. in Colfax, and one hour prior to the service on Thursday at the church. Military honors will be conducted by the Russell Toycen American Legion Post 131.