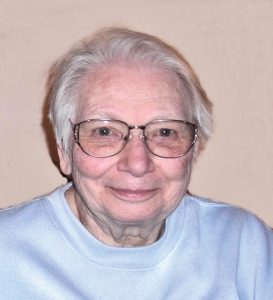 Gladys was a longtime member of St. John the Baptist Catholic Church in Cooks Valley where she played the organ for more than 25 years.  She enjoyed reading, playing cards, embroidery, and gardening.

She was preceded in death by her parents her husband of 67 years, Joseph; and two sisters, Irene Samens and Sharon (Lester) Zenner.

Mass of Christian Burial will be held at 11 a.m. Thursday, October 11, 2018, at St. John the Baptist Catholic Church in Cooks Valley with Father Victor Feltes and Deacon Dan Rider celebrating the Mass.  Visitation will be held from 4-7 p.m. Wednesday at Schriver-Thompson Funeral Home in Bloomer and one hour prior to mass Thursday at church.  A Recitation of the Holy Rosary will begin at 9:40 a.m. Thursday at church.  Burial will be held in the church cemetery.