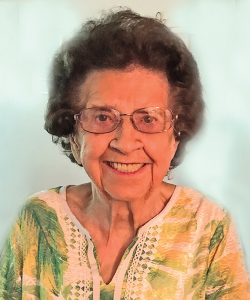 She was born on July 5, 1921, in Ridgeland, WI, a daughter of John and Clara (Gravernoen) Knutson.

Irene worked for Jerome Foods. She enjoyed reading, dancing, crocheting and quilting. Irene was a member of Colfax Lutheran Church and Ladies Aid.

She was preceded in death by her son, David Smestuen; parents; brothers, Richard, Ervin and Kenneth Knutson; sisters, Josie Ebling and Hazel Hartung; and various in-laws and friends.

Funeral Services were held at 1 p.m. on Saturday, September 29, 2018, at Colfax Lutheran Church, 601 River Street, with Pastor Leslie Walck officiating. Visitation was from 5 to 7 p.m. Friday, September 28, 2018, at Sampson Funeral Home, 1017 E. Railroad Avenue in Colfax and again one hour prior to the service at the church. Burial was in Evergreen Cemetery in Colfax.