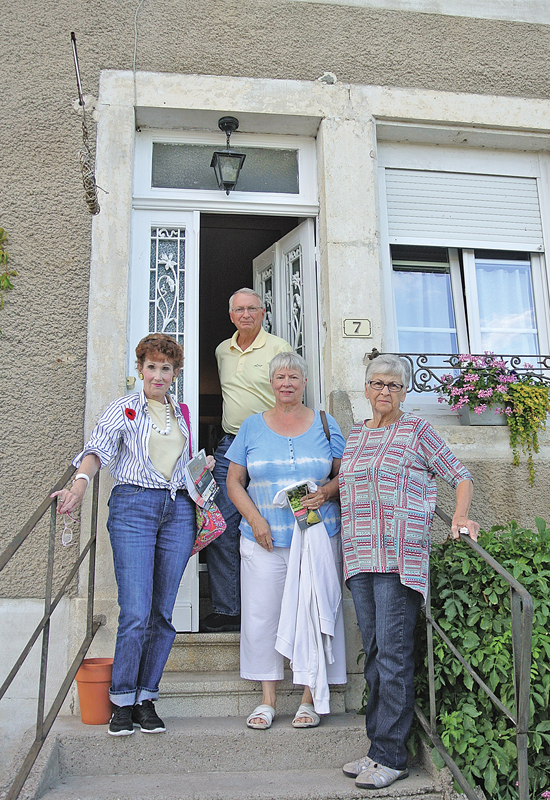 WE ARRIVED at the front entrance to the Bed and Breakfast that was our home for three nights in Fresnes au Mont, France. From left are Mary Berg, Allen Klatt, Paula DeWitt and Paulette Klatt.

Bed and Breakfast in France

On Sunday in Normandy, we parted ways with Don, Missy and Corey Klatt as they headed by train to visit the family of a French exchange student that they hosted a couple of years ago.

While Allen, Paulette, Paula and myself and our guide Mary Berg drove the five hours to a small sleepy community of Fresnes-au-Mont near the border with Germany and near a World War One battlefield.

Our goal was to visit the St. Mihiel American Cemetery near Thiaucourt and the final resting place of Allen and Paula’s great uncle, Helmer Dragseth, who died of injuries nine days after World War One was over.

Our accommodations were in the bed and breakfast home of Paule and Jean Pol Buvignier and each morning we were treated to a wonderful breakfast consisting of fresh juices, homemade breads, jams, jellies, yogurt, and topped off with an oven-baked dessert. I questioned if the butter came from a cow that was part of the property, but was told they did not have any cattle.

The home held five bedrooms; each with their own bathrooms and the home was once a barn that was remodeled into the facility. I do not have the words to describe how nice the place was and how friendly our host couple was. I was delighted to see all the antiques that were used to furnish each room.

The community was like many small countryside villages in France that we passed through on our way to the east of France. As we traveled, it became apparent that each of these small villages had many things in common, one of which was the large church with a tall steeple. Fresnes-au-Mont was no exception and just down the street from our quarters was a large church with its tall steeple and bells that tolled every half an hour from 7 a.m. to 10 p.m. 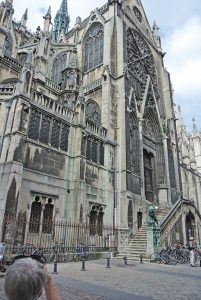 A LARGE CHURCH in Nancy, France that we toured.

We questioned about the church and the membership, but were informed that services in that church were held only three times a year. Jean Pol, we were informed, is a deacon and served over 50 churches in the area. Paule said that the community was “dying,” because there was no industry, and young people moved away and many people no longer attended church. I thought to myself that it is what is happening in America that churches are no longer seeing packed houses Sunday mornings.

As for farming that we saw as we traveled, it was like here in the U.S. Large fields with big farm equipment traveling the narrow roads of rural France.

We arrived at the St. Mihiel Cemetery and went to the office to find out where their uncle was buried. There the cemetery’s superintendent met us and found and accompanied us to the grave site and gave us a lot of information about how they care for the cemetery and how the fallen soldiers were interned. He explained that they recently found the body of a missing American serviceman in a fence line near the cemetery and he was buried with honors. He also pointed out that during the 1930s, a soldier’s mother or wife was provided with free transportation by the U.S. Government to come to France and visit the loved one’s final resting place. 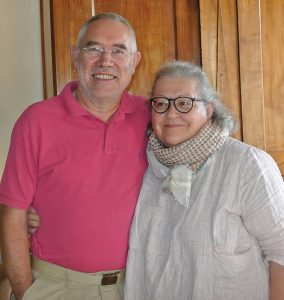 IN THEIR LIVING ROOM are the proprietors of the Bed and Breakfast in France that we stayed for three nights. Jean Pol and Paule Buvignier were great hosts and are pictured in their living room.

In the map room at the cemetery, the superintendent explained how the battles in that area took place. He noted that George Patton fought in the area during both wars and in World War One he drove his tanks in a north-south line and in the second war it was from the west to the east.

It was afternoon when we left the cemetery and we found a bar and grill to get some lunch. I must relate that if you want to eat, make plans to stop early as most eating places close at 2 p.m. and open again at 7 p.m. The place where we stopped was busy, but after a wait we were served, but we spoke no French and they spoke no English. But we were able to relate what we wanted. At this stop I was wearing a “Packer” T-Shirt. Most people in that establishment recognized who the Packers are. As we were leaving, the owner’s son – who was in his twenties and spoke some English – expressed his thanks for what the Americans did for the French during the World Wars.

Two days later we were driving back to Paris and to a hotel next to the airport. On August 17th we boarded our nine-hour flight back to Minneapolis. And, if you are planning a trip to visit France, I would suggest that you contact Mary Berg. 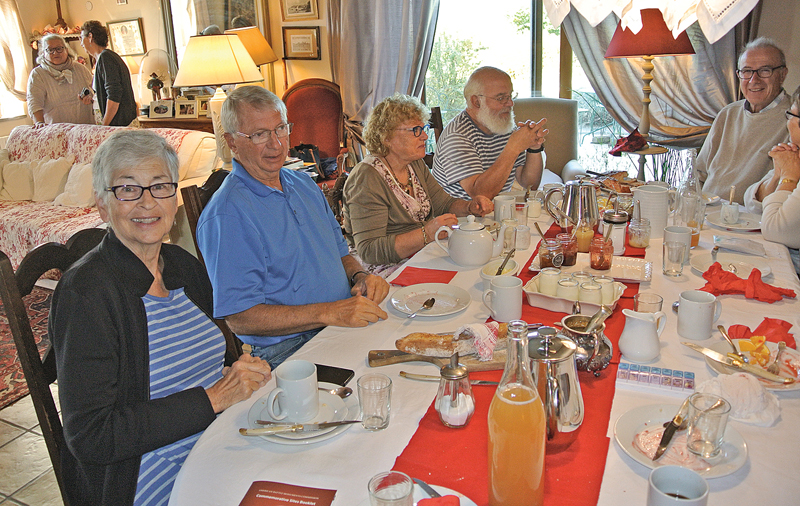 AT THE BREAKFAST TABLE are Allen and Paulette Klatt and two other couples that stayed a night. Note the nice way the table is set for us and the fresh baked goods served to our delight.