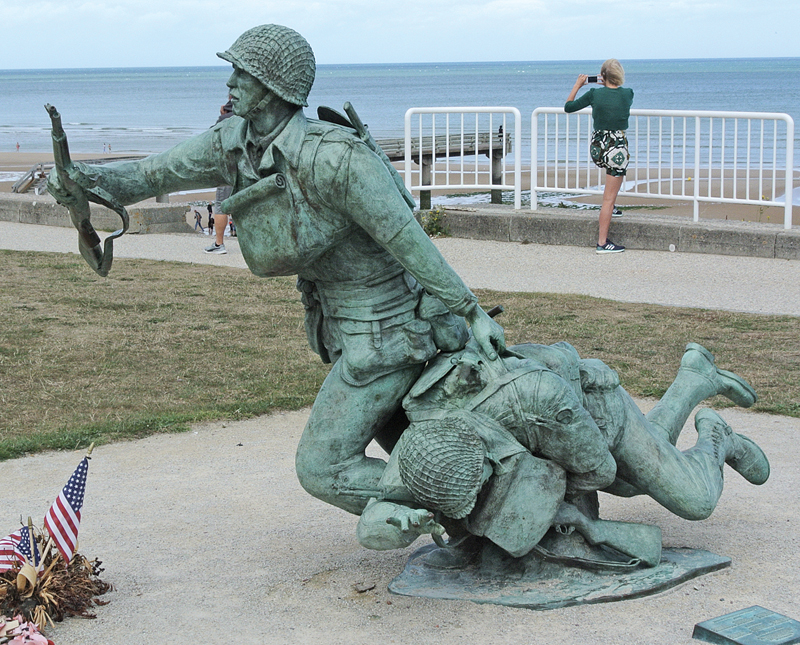 A Memorial near Omaha Beach in France honors those who died and those who cared for the comrade-in-arms. —photo by Carlton DeWitt

War is hell and it should be avoided by all means. During our visit to France, we found that you could not travel far and not be in view of the cemeteries that were the final resting place for all those brave people that made the assault against the Nazis.

One of the largest cemeteries of World War II is the Normandy American Cemetery, located just above Omaha Beach at Colleville-sur-Mer. It honors the American soldiers who died during the Battle of Normandy, and counts amongst 26 permanent cemeteries on foreign soil.

A key memorial site, it contains the perfectly aligned headstones of 9,387 soldiers who fell in combat. Completing this moving ensemble is a Garden of the Missing where the names of 1,557 soldiers are listed as missing in action, lost, or buried at sea, is engraved. A chapel, a memorial and the Visitors Center is also located at this cemetery. Printed in a visitor’s guide of the Cemetery is a short reminder that states: “This is a place of commemoration and we therefore ask visitors to behave accordingly, and be both silent and respectful. The day we were at cemetery, along with the couple of hundred other visitors, they were all very respectful, even the younger children.

How many soldiers did the United States lose during World War Two? According to a piece that I obtained from a web site, 407,316 soldiers were killed and another 671,278 were wounded. Russia was the biggest loser of the war with 13,600,000 dead soldiers and Germany lost 3,250,000. 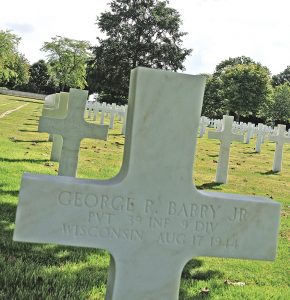 At the Brittany American Cemetery near St. James is the final resting spot of Helmer Alseth, Paula DeWitt’s uncle and also the resting spot of a number of fallen soldiers from Wisconsin including this of George Berry who died on August 17, 1944. —photo by Carlton DeWitt

But, it has been estimated that between 50 and 80 million people lost their lives because of the War.

According to the American Battle Monuments Commission (ABMC): “Recognizing the need for a federal agency to be responsible for honoring American armed forces where they had served overseas and for controlling military cemeteries, monuments and markers on foreign soil, Congress created the ABMC. General of the Armies John J. Pershing was appointed to ABMC’s Board of Commissioners in 1923, and was elected chairman. He served in that capacity until his death in 1948.

“Following World War I, the government recognized a need for a burial and repatriation policy for America’s war dead. Over the course of the conflict, more than 116,000 Americans lost their lives in Europe. Understanding the need to acknowledge America’s contribution to the war in Europe through commemorative cemeteries and memorials overseas, the government also respected the desires of many Americans to have their fallen family members returned to the U.S. Under provisions of the law, families were entitled to select permanent interment of a loved one’s remains in an American military cemetery on foreign soil or repatriation of the remains to the U.S. for interment in a national or private cemetery. The majority of families chose repatriation. Approximately 30 percent chose permanent interment in an ABMC cemetery.”

“If ever proof were needed that we fought for a cause and not for conquest, it could be found in these cemeteries. Here was our only conquest; and we asked … was enough … soil in which to bury our gallant dead.”—Lt. Gen. Mark W. Clark