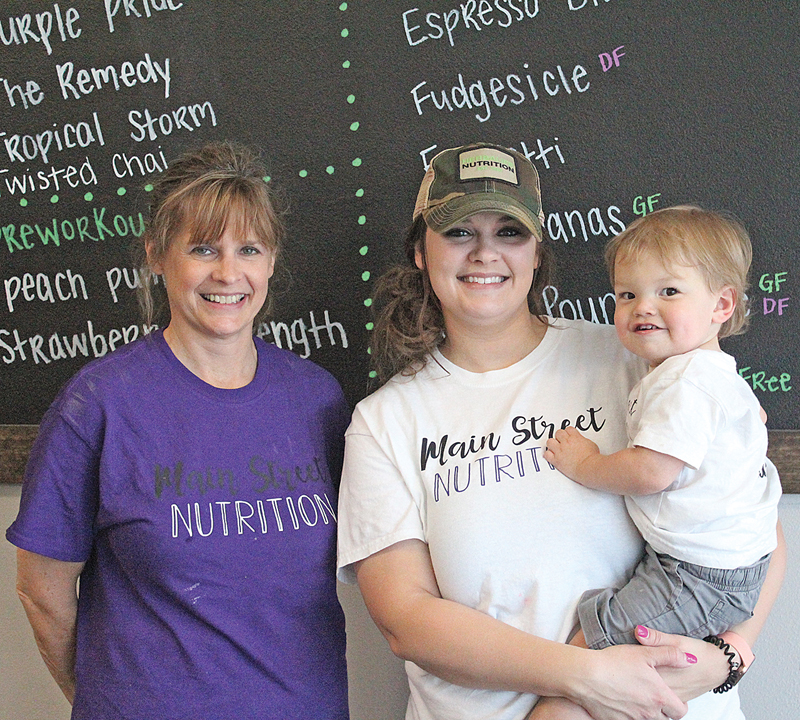 BOYCEVILLE – To two Boyceville natives Mary Larson and her daughter Chelsea Reitz wanted to find ways of helping the community to feel happier and healthier through the way of nutrition.

The mother-daughter due teamed together a year ago in June after visiting Rize in Menomonie and decided they wanted to find a place of their own to open where there was a need for a nutrition club.

“We had tried so many different shakes and thought we wouldn’t like the ones Rize sold,” commented Larson, “so we sat down outside and looked at each other and were like oh! This is really good.”

After a three day trial to learn about the product the pair has been hooked and loving it ever since. Larson explained that during the three day trial she had lost four pounds while her daughter lost seven.

According to Larson she has always been interested in nutrition and the products they use were the only ones she has been able to stick to.

“I’ve tried so many different shakes and eating plans and this is the one thing that I continue to do,” commented Larson, “ it’s a life style but it’s not a bad thing.”

Chelsea explained that she had also tried different things during college and then when  her son was born the opportunity arose for her to try the shakes with her mom.

“I had just had my son (Bentley) and so I was looking to lose some baby weight, and I’ve lost 40 pounds,” stated Reitz. But it wasn’t just about the shakes and teas working for her, more importantly it was that they tasted good and she felt better then she ever had.

According to Larson they worked for Rize part time while they continued to look for their own space. “They always had so much fun at Rize they were helping a lot of people to feel better.” she commented.

The pair felt like Boyceville had been lacking something and they felt their little store on main street was the perfect spot for them. “This is our home town, so it is really close to our hearts and we knew we wanted to be here … we know the majority of the people in town and we just love it here,” Chelsea explained.

The nutrition club does offer alternatives for those allergic to gluten, dairy and soy or even if the customer chooses to have one of those options they are readily available.

“We do have an alternate protein it’s like a rice, pea, and sesame blend also our herbal life 24 line is for the every day athlete and that’s a whey protein … our teas are all natural products of a green and black tea blend,” explained Chelsea.

But they also explained that every now and then they offer a specialty drink that has an extra boost of flavor.

The duo explained that with the proteins you can make alternatives such as pancakes, muffins, fudge and the always popular brownie. “Sometimes you just have to chew,” joked Larson.

If you are wanting to lose weight then the recommended two shakes a day is okay, but also to remember snacking is good to as long as it is more proteins such as; eggs, beef jerky and cheese sticks.

Larson and Reitz were awarded a cowbell while at their recent training in Kansas City for serving 100 shakes and teas their opening day.

The pair agreed that the mornings have been great for them business wise and are typically their busiest from six until about 9 a.m.

“It’s nice for people in town to  come in for breakfast because Boyceville is a commuter town, so it’s a great option for them to have because you feel better if you don’t skip breakfast,” Larson stated.

Monday and Tuesday is the slow days for the club seeing around 65-75 people per day and then picking up Wednesday thru Friday.

The mother and daughter also help in choosing a flavor of shake and tea if you can’t choose out of the options up on the menu board.

“Cherry cone and butterfingers seem to be the popular flavors,” explained Larson, “the cherry cone tastes like a cherry dilly bar and with the butterfingers we do a special treat and top it with a little bit of butterfingers candy.”

Each month there are new flavors of the month with Septembers being orange burst tea blast and an apple crisp shake.

Main Street Nutrition, located at 917 Main Street, opened its doors on August 13 serving up 100 shakes in their first day in a small town of 1000, their first week they had three days where they served 100 or more shakes and teas with their record being 108. But there is hope that soon they will break that record.