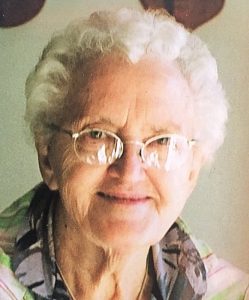 Marie A. Schindler, 96, of Menomonie and formerly of rural Colfax, passed away peacefully on Sunday, September 16, 2018, at The Neighbors of Dunn County in Menomonie.

She was born Marie Bresina on February 7, 1922, in Tilden, Wisconsin. She was the thirteenth of Tom and Mary (Zwiefelhofer) Bresina’s 15 children. Her family ran several businesses including a blacksmith shop and dancehall in Tilden; Marie loved to reminisce about an eventful childhood filled with the many relatives, visitors and customers who came and went each day.

Marie attended St. Peter Grade School in Tilden, graduated from McDonell High School and attended UW-Eau Claire. Before she married, she worked in the office at the Tilden Creamery and at the county ag office—and bought her own car. She met her husband, Francis Schindler, at a dance; “I knew right away he was the right one,” she said. They married on October 19, 1946 at St. Peter’s Catholic Church in Tilden. Marie and Francis moved just outside of Colfax and began life on their dairy farm. They raised five children. Marie helped with the milking each day, raised a huge garden, kept a flock of chickens and managed all the housework. She loved to sew and made clothes, teddy bears, doll clothes, quilts and “TV blankets”.  The children and grandchildren still have many of her pieces. Marie also loved to bake and was famous for her potato buns, apple bars, caramels, pies and cookies. She enjoyed playing the piano and getting everyone to sing along.

When Marie and Francis sold their farm and retired, Marie went to work at the Colfax nursing home where she was a nurses’ aide. She went to work to “keep busy” as both of her sons were serving in Vietnam at that time, and she worried about them every day until they returned; she was always proud that her husband, two sons and three sons-in-law all served their country. Marie ended up loving her nursing home job and continued for nearly twenty years. During this time, Francis and Marie purchased a cabin on Long Lake in New Auburn where they spent many happy days with family and friends. They merged Marie’s job and their cabin get-away each year by inviting Colfax nursing home residents for pontoon rides and a cookout.

After leaving their Colfax home, Marie and Francis spent six happy years at The Oaks in Menomonie. Marie eventually moved to Neighbors of Dunn County which she called “the best place” with “the best people taking care of me.”

She was preceded in death by her parents; her brothers, Bernard, Frederick, Joe, Albert, Henry, Bob, George, Art and Tom; and sisters, Ida, Martha, Bertha and Helen; also by her son-in-law, Chuck Carlson.

Mass of Christian Burial will be held at 11 a.m. Thursday, September 20, 2018, at St. John the Baptist Catholic Church in Cooks Valley where she and Francis were lifelong members.  Father Victor Feltes will celebrate the Mass.  Visitation will be held one hour prior to Mass at church.  Interment will be at a later date in the church cemetery.  Schriver-Thompson Funeral Home & Chippewa Valley Cremation Services in Bloomer is serving the family.