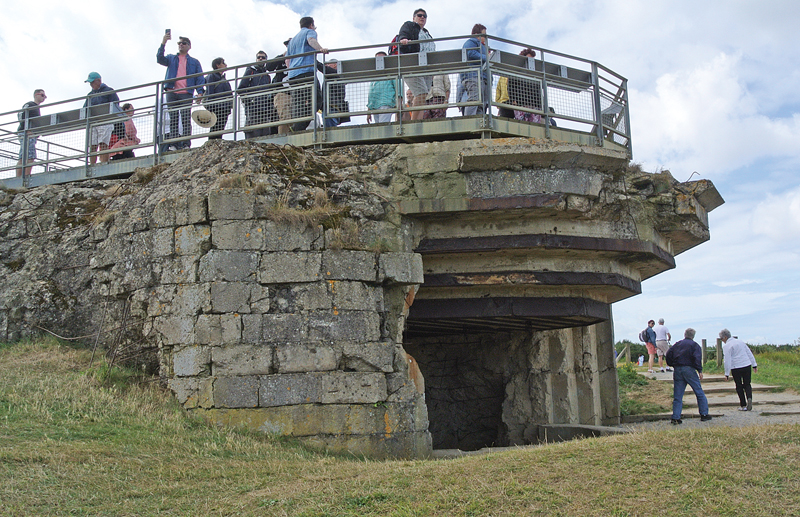 A German Gun emplacement that overlooks the coast of France is a draw to visitors to the battlefield. The area is blanketed with holes from the shelling and bombing on D-Day. —photo by Carlton DeWitt

June 6, 1944 is the day that allied armies landed on the beaches of Normandy in France to bring World War Two to an end.

Our visit to the battlefields allowed us a close look at the soil that our Armies crossed over and drove the German army back.

I had thought of the landings on the five beaches (Utah, Omaha, Gold, Juno and Sword and Pointe du Hoc) were just a small part of the French coast and when we visited that area I was set back at the distance that those beaches took. Those beach heads were spread over more than fifty miles of shoreline. Visiting them all took an entire day.

One site that we visited was a small bridge called LaFiere Bridgehead where American troops held off Germany attacks and held on to the bridge. That bridge was the only way that German forces could re-enforce their troops at Utah Beach. The German army had flooded the area and the road and small bridge was the only way to cross. Today it is just a small stream and it was very hard to visualize what it might have looked like during the three days in June that the two armies fought over control of that bridge and road. 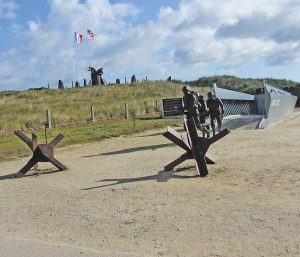 A landing craft is displayed at Utah Beach as part of the memorial there. —photo by Carlton DeWitt

Nearby is a small church that shows the battle scars that it received during the fighting, with many bullet scars on its exterior. The battle of the LaFeiere Bridge took the lives of 254 American fighting men with another 525 being wounded.

Our great guide, Mary Berg, made sure that we traveled to all the beaches and saw many of the sites. While at Omaha beach, Mary and Paula walked out on the beach and collected a small amount of sand as a souvenir of our visit.

You can’t visit the area without viewing the numerous Germany gun emplacements that they built as part of their Atlantic wall to stop the Allies from landing in France. At Pointe du Hoc, American men had to climb the steep bank to gain a foothold and the land is still blanketed with holes from the bombing and the shelling of the battlefield.

I had thought that the number of people traveling to see this area of Normandy would be very limited, but at each stop, the parking lots were full of cars and buses, not only people from the States, but many Europeans were there also and despite our language barrier, those local people were very appreciative of the sacrifice our troops made to free them from Nazism.

If you every get the chance to go to France, it is a must that you visit Normandy.