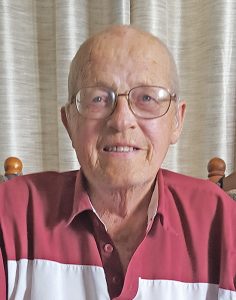 Lyle was born in Colfax to Elmer and Bessie (Olson) Christianson on October 18, 1935.  He was baptized and confirmed at Colfax Lutheran Church where he was a lifelong member.

While in high school Lyle worked for Ken and Helen Reed at the Colfax Messenger.  He graduated with the Class of 1953 from Colfax High School.  He then attended Dunwoody College of Technology in Minneapolis while also working at Brown & Bigelow and the Rose Tribune in St. Paul.   After completing his schooling he worked as a tramp printer, working for numerous area newspapers.

On July 4, 1958, Lyle married Inez Larson at Colfax Lutheran Church.  After marriage they lived in Cornell and Lyle worked at the Cornell Courier.  They then moved to Chippewa Falls where he worked as a Linotype operator at the Chippewa Herald Telegram.

Lyle was a talented horseback rider.  He belonged to two saddle clubs and rode in many horse shows and parades.  In 1967 he and his horse, Jiggs, broke the time record in pole bending at the Minnesota Quarter Horse Association competition at the Hippodrome.  He also placed fifth in the barrels that same day.

In 1968 the Christiansons returned to Colfax and purchased the Colfax Messenger.

The family invites you to Lyle’s funeral service at Colfax Lutheran Church, 600 Balsam Street, in Colfax on Wednesday, September 12, 2018, at 11 a.m. with Pastor Leslie Walck officiating.  Burial will be held immediately following the service at Evergreen Cemetery in Colfax.  Visitation will be held Tuesday from 5-8 p.m. and Wednesday from 10-11 a.m. all at Colfax Lutheran Church.

The family would like to express their gratitude to Hospice/Palliative Care at Mayo Clinic Health System.