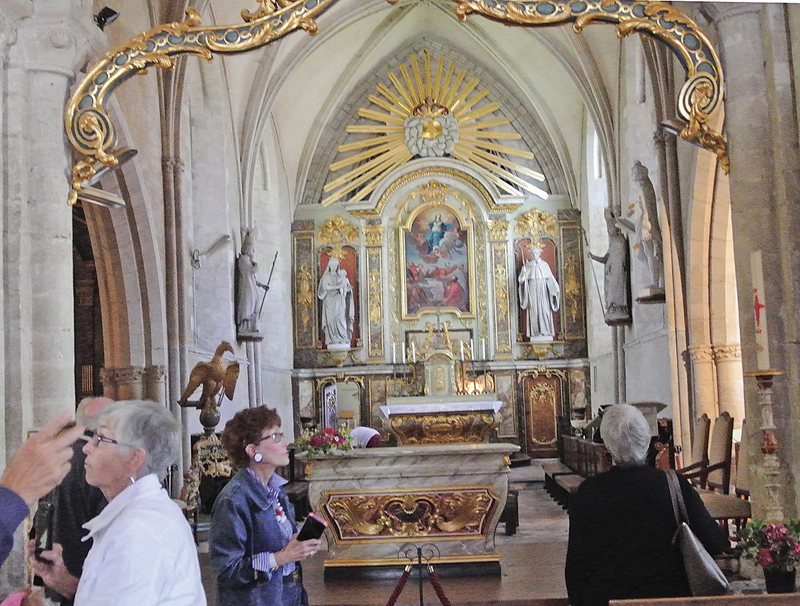 A view of the inside of the Church at Sainte-Mere-Eglise where an American parachutist got stuck. It must be several hundred years old with slab rock as floors. —photo by Carlton DeWitt

Leaving Paris, by train was an experience. I thought that the airport was a busy place, but the Paris train depot had a large number of people coming and going. I think that there were over 20 tracks at the depot and all were either loading passengers or unloading.

We boarded and were off to Caen, arriving in two hours by the high-speed train, where we were to pickup two rental cars for the drive to Carentan where we would spend the next four nights.

Our visit was to not only visit the grave of uncle Helmer H. Alseth, but to visit the many battle sites in Normandy where Allied forces landed in France on June 6, 1944 and during the long summer fought in Normandy to defeat Nazism and to free the world.

Carentan, Sainte-Mere-Eglise and other local communities were the first to see Allied troops coming to fight the Germans. There were airborne troops that were dropped ahead of the landing at the beaches.

I would like to reprint a narrative from a guidebook about D-Day. “Chronologically, there were three definable phases to the operation on June 6th, 1944: the air landings (which were centered on Utah Beach in the west and Sword Beach in the east), the air and naval bombardments of the Atlantic Wall, and the seaborne landings on the five beaches (Utah, Omaha, Gold, Juno and Sword) and Pointe du Hoc. 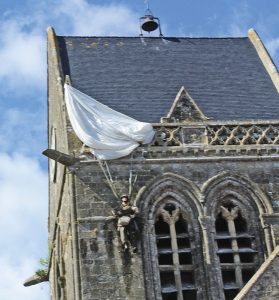 A recreation of Private John Steele hanging from the church steeple in Sainte-Mere Eglise, France on June 6, 1944. —photo by Carlton DeWitt

“So it was that by the early hours of the 6th of June, the first airborne troops had already set foot on the soil of Normandy; the British in the east and the Americans in the west.

“The American parachutists were tasked with capturing Saint-Mere-Eglise and securing the beachhead at Utah Beach. At 4 a.m. Sainte-Mere-Eglise was stormed.”

One of the first places we visited was Sainte-Mere-Eglise, just a stone throw from the Utah Beach. Here paratroopers landed right in the middle of the community. Shelling of the area from the sea set a house on fire and the German troops were out helping the local citizens battle the fire when American paratroopers from the 82nd and 101st Airborne Divisions were dropped in the wrong spot and were easy targets of the Germans.

If you remember the movie “The Longest Day” there is a scene of a paratrooper landing on top of the church in Sainte-Mere-Eglise and his lines get caught in the steeple of the church and he hangs there for several hours while the church bell rings. That man was Private John Steele (1912-1969). He was shot in the foot and then taken prisoner by the Germans, only to later escape and rejoin his unit.

The church has a likeness of Steele hanging from the church roof for the number of tourists that visit the town to view. Also in the community is a large museum for World War II memorabilia with tanks, guns, a glider, and other items that soldiers would carry.

According to the place card on the Sherman Tank that was on display at Sainte-Mere-Eglise, it was powered by a 30 cylinder Chrysler engine of 467 horsepower. The United States made over 49,000 Sherman Tanks during the war.