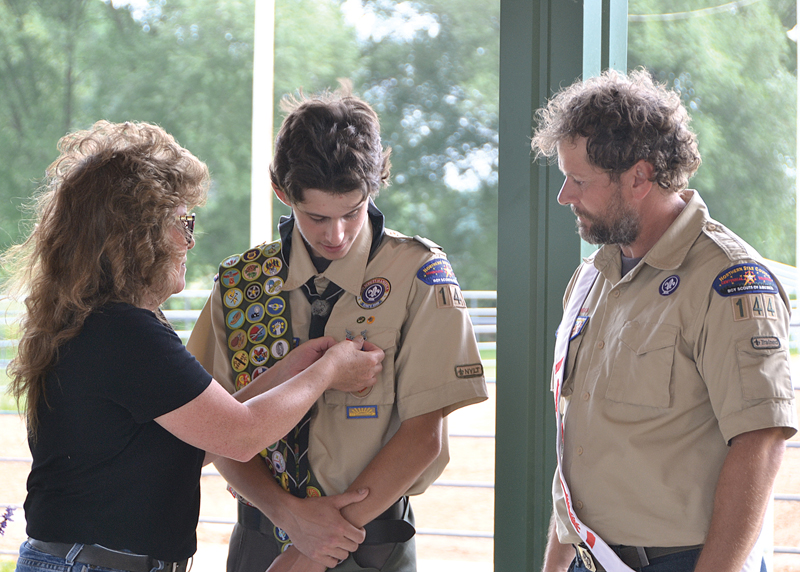 GLENWOOD CITY – On August 5th, 2018 Nolan Stodola received his Eagle Scout award and badge during a ceremony held at the St. Croix Fairgrounds. A fitting place since this is where his project is located.

Nolan has been a part of scouting for almost as long as he can remember but pretty much for the last twelve years. He was  a part of Troop #139 out of Glenwood City but needed to switch to Troop #144 out of Somerset to do his Eagle Scout project because #139 just wasn’t active enough.

The third requirement is to earn 21 merit badges in specific areas such as first aid, citizenship and personal fitness just to name a few. Nolan stated that you can actually get your Eagle project done before you get your last couple of merit badges but you have to have everything complete before you can get your award. For Nolan his project was the last part of earning his Eagle Scout rank.

Stodola’s project was to create a new area for the flag poles at the fairgrounds as well as to add another pole for the state flag. Previously the fair had just been raising the American flag and the 4-H flag. He got this idea because every year troop #139 would raise the flags at the start of the fair, at the 4-H Living Memorial Garden and he said each year the tent that was there kept getting closer so they ended up walking over tent stakes to get to the poles to raise the flags. Besides which they needed an extra pole so they could raise the state flag as well.

Once the scout has an idea for his Eagle Scout project he then has to get approval from his Troop, the Boy Scout Council (namely the District Advancement Committee) and of course the beneficiary of the project, in this case the the St. Croix County Fair. And while this seems fairly easy, a complete project proposal is what is submitted to the District Advancement Committee which entails several pages of details related to the project. The approval aspect of Nolan’s project took 1½-2 months before he got all the signatures and paper work he needed.

Nolan basically acted as the general contractor for his project making sure that all aspects of the project were completed in a timely manner. After approval the first thing that Nolan needed to do was start a fundraising campaign to cover all the costs associated with his project.

Besides setting out donation buckets around town and at the local legion halls, he also solicited donations from local businesses and Legions around the county because it’s a county fair. The City of Glenwood City donated to his project as well as Wilson Legion Post #330, Wilson Ladies Auxiliary, Somerset Legion Post #111 and Glenwood City Legion Post #168. Dr. Skip Rasmussen and Wayne Bundy were some of the local businessmen who donated as well as Dean LeMay who donated the use of his machinery and time for Nolan’s project. “He was awesome,” commented Stodola.

Nolan also stated that the St. Croix County 4-H Leader’s Association bought their own flag pole and that Rita Palewicz donated flowers and helped with the landscaping.

Nolan was able to raise enough money to cover all his costs with a nickel leftover which he donated to the St. Croix County Fair.

With his project complete, fairgoers can view the flag poles and landscaped area in their new, more central location on the corner by the EMT building.

Since Nolan hasn’t aged out yet he will continue to be active in his troop and he hopes to be an assistant leader when he graduates from high school.

Nolan is a senior this year at Glenwood City High School. Besides scouting he is also involved with the Hilltopper Band, Choir, Tech Ed Club, and FFA. When not at school or busy with these various activities, Nolan can be found working at the Hardware store in town.

Nolan’s next goal is to finish school and enjoy his senior year.