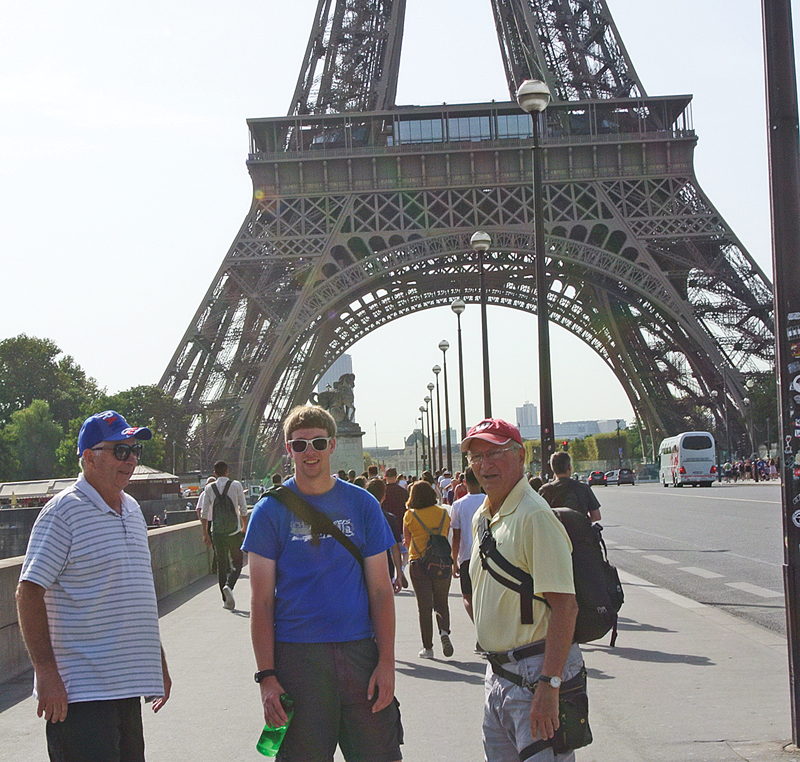 DONALD, Corey and Allen Klatt near the Eiffel Tower in Paris.sidewalk café in Paris. The ice cream did not enhance the taste of the wine.

Paris, the City of Lights

Our direct flight from Minneapolis to Paris took seven and a half hours, landing just in time to catch the morning rush hour traffic. The trip from the airport to our hotel by taxi cost €65.00 Euros. I bring up the cost because many European countries have the Euro for their currency.

An Euros is one to €1.17 of our money. The smallest paper bill is a five Euro bill with the ten Euro bill being physically larger. The ten is larger than the five Euro bill and the twenty is a little larger yet. They have no one Euro bill. All small amounts are in coin. They have a one Euro cent (penny), five Euro cents, ten and twenty Euro cents and the fifty, one Euro and a two-Euro coins.

Back to the trip, our hotel for the three-day stay in Paris was within walking distance of the Eiffel Tower and the Seine River. We walked along the river on a well-built scenic walkway with many commercial stands. We purchased tickets for a tour boat ride on the Seine River, which allows a view of such places as the Louvre, Notre-Dame and other scenic places that Paris has to offer visitors. 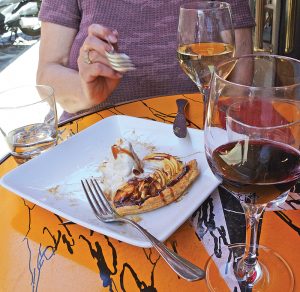 PAULA enjoying a glass of French wine and apple pie alamode at a sidewalk café in Paris. The ice cream did not enhance the taste of the wine.

Paris may be the “City of Lights”, but it lacks public restrooms. I attempted to find a public facility along the river walk, but I ended up paying to use a urinal in the lower deck of a boat that was tied up along the river. I soon found out that you do not have to worry about leaving the seat up or down, there is no seat!

Paris is a city of some 2.2 million people, plus about the same number of tourists and that was sure visible the day we visited the Louvre. Paula commented about the crowd of people around the entrance to the Louvre that day: “It looks like more people than at the Minnesota State Fair.”

I told our group that I saw an old girl friend at the Louvre. Her name is Mona Lisa. I saw her 55 years ago, when she was on display in Washington D.C. I have to say that she did not look a day older than she did in 1963.

Just in case you do not know who Mona Lisa is? She is a five hundred year old, half-length portrait (21×30 inches) by the Italian Renaissance Artist Leonardo da Vinci. She is the best known, most visited, most written about painting of all times. Da Vinci painted her in about 1505 and the painting has been at the Louvre since 1797. We stood in line for a short time to get a look at it and it is kept under a strict climate-controlled display container. I found out that she is valued at $800 million. The Louvre has gallery after gallery of famous paintings and a few hours of time is not enough to view them all. 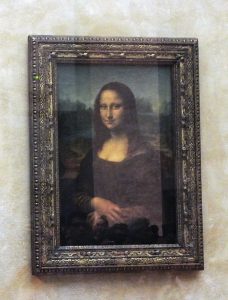 Mona Lisa on Display at the Louvre.

The buildings are mostly century old structures, but are updated and modern. The avenues that we walked had all the services that a person as a visitor would need. Grocery, drug, service stores and many sidewalk cafes. Many of them had sidewalk seating. One thing I noticed was that there were no insects flying around. Even our hotel did not have screens on the windows.

The food was for the most part very good, and most eating establishments menus had the entry listed not only in French, but also in English. The eating establishments close at 2 p.m. and open again at 7 p.m. I must comment on how friendly all the people that we came into contact with were. Even with the language barrier, they bent over backwards, so to speak, to help us out.