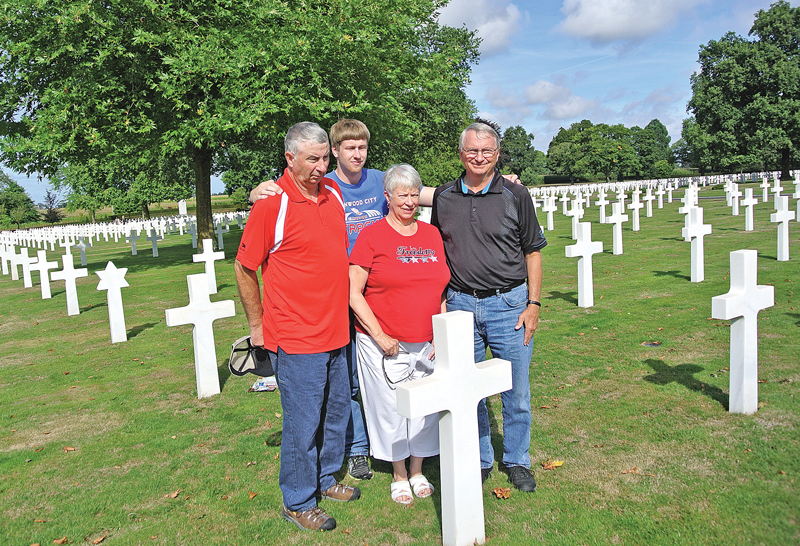 Over the next few weeks I would like to write about our vacation to France and various places that caught my attention during our recent trip. Mary Berg, local authority on the World War II battlefields at Normandy, led our family group. Paula’s brothers and families, Allen and Paulette Klatt of Florida and Donald, Missy and Corey Klatt of Downing, accompanied Paula and me.

The main reason for traveling to France was so the family could visit the final resting spot for two of their uncles that died fighting in the two World Wars. Both men were from Menomonie.

Don, Missy and Corey also had another reason and that gave them a chance to visit the family of a French exchange student that they hosted a couple of years ago.

Their mother, Bernice Klatt’s, brother, Helmer H. Alseth was killed on August 9, 1944 and is interred at the Brittany American Cemetery near St. James. He was part of the June 6th, 1944 D-Day landing at Normandy. He was 21 years old.

This cemetery contains the remains of 4,408 service people killed in the Second World War and includes 21 sets of brothers and 97 unknowns and a list of 498 more soldiers that are missing in action.

The Brittany American Cemetery and Memorial became a Temporary military cemetery three days after the U. S. 8th Infantry Division liberated the site on August 2, 1944. It evolved into a permanent military cemetery after the war. France granted the use of the site in perpetuity without charge as a burial place for those killed in the liberation of Europe.

If you have any doubt that war is not hell, walk through several of these cemeteries near the beaches of Normandy and as you get choked up at the cost in lives that war takes, you can only know that avoiding it is the best route to take.

Our next item on the schedule was a six-hour trip from our hotel near the Normandy beaches to the eastern part of France to the St. Mihiel American Cemetery and Memorial near the town of Thiaucourt-Regnieville to find the grave site of a great uncle who died in World War I.

This great uncle, Helmer Nestor Dragseth, is the brother of Paula’s grandmother Sophie Alseth. Arriving we sought information as to the location of the grave and was introduced to the Memorials Superintendent who asked several questions about our connection to the veteran. He then took us to Helmer Nestor Dragseth’s gravesite.

Helmer died on November 20, 1918; his 25th birthday, and nine days after the end of the First World War. According to information that the family has, Dragseth was apparently injured by a booby-trapped piece of equipment and died of those injuries.

The cemetery is about the same size as the first cemetery that contained the remains of Dragseth’s nephew and namesake, Helmer Alseth, with 4,153 dead from World War One including 117 unknowns and a list of some 282 services personal listed as missing in action. The Superintendent explained how the remains are clothed and how the burial is conducted. He also noted that many of the stones that have stood for most of a century are being replaced. He also noted that they had a recent burial of the remains of a soldier, who was discovered in a fence line just a short distance from the cemetery.

Also interred here is 2nd Lt. J. Hunter Wickersham of the 89th Division who received the Medal of Honor posthumously for his conspicuous gallantry on September 12, 1918.

A number of stones had information clips attached with a picture of the fallen and a note about their mother having visited the site during the 1930’s. Back then the army had a program that allowed mothers or wives to travel to France at the government’s expense to visit the final resting spot of their loved ones.

I would like to print a prayer that is engraved into the walls of the Memorial at the Brittany Cemetery:

“All mighty God, our sons, pride of our nation. This day have set upon a mighty endeavor. A struggle to preserve our republic, our religion, and our civilization. They will be sorely tried by night and day without rest until the victory is won.

“Some will never return. Embrace these Father and receive them.”