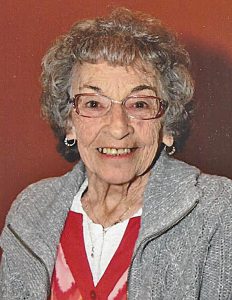 Shirley was born April 1, 1934 in the Township of Hammond, WI to James Earl and Lillian (Sachsenmaier) Brennan. She graduated from the Glenwood City High School in 1952 and worked many positions over the years to support her family. She worked at many supper clubs where she enjoyed working with the public. When she first arrived in Savanna she worked at the manufacturing facility, National Lock. Shirley also held numerous healthcare positions as a medical receptionist at the Savanna Medical Center and she managed the medical records at a nursing home in St. Paul, MN. Her most cherished position was when she was the manager at the Glenwood City Senior Center. Shirley was a valued member of the organization leading the way by serving the community, making sure the homebound, some of the most vulnerable members of the community were not forgotten. She would provide daily lunches, baked goods and even Christmas gifts. Whatever they needed she was there to serve, constantly reminding us that all human beings should always feel valued and never forgotten.

She was deeply faithful and was always affiliated with the Catholic church whereever she lived, passing her strong faith down to her children. Shirley loved spending time with her grandchildren and had a very special relationship with each. As her children moved across the United States she loved traveling to visit them. She enjoyed sight seeing and experiencing the beautiful oceans, mountains and deserts. She enjoyed crafting and loved to share her creations with family and friends.

Shirley is preceded in death by her parents, brother William Brennan and granddaughter Jacqueline Sue Hartman.

Mass of Christian Burial will be held at 11:00 a.m. Thursday August 16, 2018 at St. John’s the Baptist Catholic Church in Glenwood City, WI with Father John Long as celebrant. Burial will be in the church cemetery. Friends may call at the church on Thursday from 9:30 a.m. to time of service.

Memorials are preferred to the Glenwood City Senior Center, in lieu of flowers.