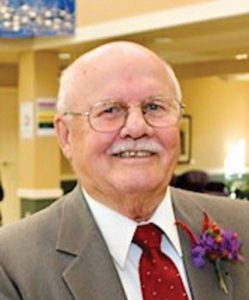 Ray and his twin brother William were born on September 3, 1925, in Payne, Minnesota, to Jens Peter and Christianne Hansen. His parents were immigrants from Denmark, coming to the U.S. by ship to live in Duluth, MN in the early 1900’s. Ray and his brother were the youngest of their 8 children. Ray always joked that he did things on appropriate days, as he was born in Payne on Labor Day. Ray grew up working on the family farm, and assisted in milking cows, raising chickens, fieldwork and gardening with his parents. Like many rural families during the Great Depression, this was all done by hand – electricity and tractors would come years later. To earn money as a teenager he peeled fence posts for 5 cents a piece; one summer he worked for a dairy, handwashing the glass milk bottles that were delivered and returned every day.

Ray graduated from Meadowlands High school in the spring of 1943, and then joined the Navy to fight in World War II. His brother William joined the Marines. They both ended up in the Pacific as part of the Okinawa campaign. Ray was a signal man on the USS Monterey aircraft carrier (the “Mighty Monty”) which saw much action in the war. He was honorably discharged from the Navy after the war ended, in 1946. He returned home and then attended college, obtaining a bachelor’s degree in Food Science from the University of Minnesota in 3 ½ years. On April 1, 1950 he married Patricia Lanthier in Duluth, MN. Ray began working in the dairy/food processing business, which took them to California, Minnesota, Indiana, and back to Minnesota, through the next 11 years. Together they had 3 daughters: Katherine, Karen, and Kristie.

They moved to Clear Lake, WI in 1961 when Ray accepted the position of manager of the Farmers Co-op creamery. He worked hard to improve things at the creamery, and took a leadership role in the research and development of the A-septic system, which began with baby formula and progressed to producing cheese sauces and puddings. Ray and Pat lived and raised their family in Clear Lake, where Ray was a charter member of the Clear Lake Golf Course and a member of First Lutheran Church. He was active in the National Milk Marketing Board, and national food processing boards. When the Clear Lake Creamery was sold to Wisconsin Dairies in 1975, Ray went to work for Associated Milk Producers (AMPI) with management positions in Esko, MN, New Prague, MN, and Dawson, MN. Upon retirement Ray and Pat returned to Amery and their marriage ended in divorce. Ray subsequently spent 6 months in Vladivostok, USSR as part of a state department technology exchange program, teaching Russians how to use new A-septic systems.

Ray moved to live on Golf Drive in Clear Lake in 1997, and was active in golfing, hunting, and fishing. He enjoyed traveling and time spent with his good friend Joyce DaBruzzi. He lived independently, with the assistance of family and good friends until October 2017, at age 92, when he moved into an assisted living apartment at Grand Oaks in Glenwood City. Due to failing health he moved to the Glenhaven Nursing Home in May, 2018.

A celebration of life will be held on August 24th, from 4-7 p.m. at Scheuermann Funeral home in Clear Lake, WI. Interment is at the Meadowlands, MN Cemetery at the Hansen family plot, on Saturday, August 25th at 1:00 p.m.