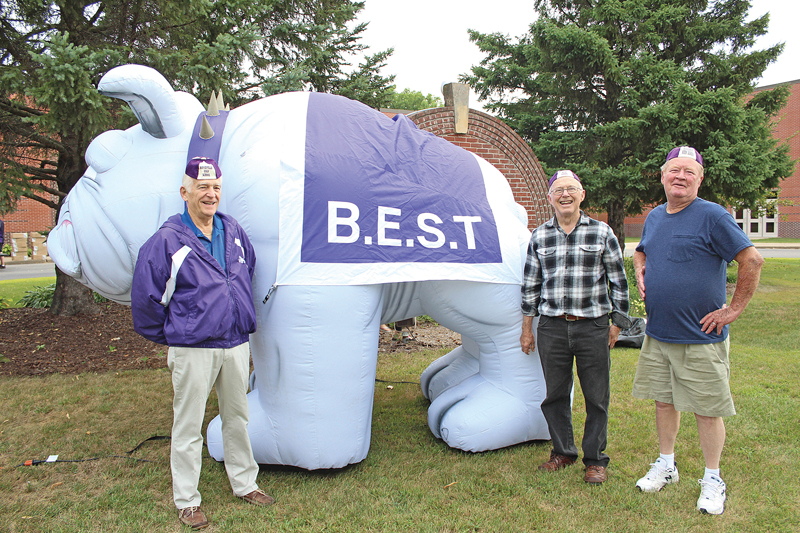 B.E.S.T. BULLDOGS — Three members of Boyceville’ Class of 1958, from left to right: James Harvey, Merlyn Jones and Roger Sutliff, posed in front of the Boyceville Education Scholarship Trust’s new addition, an inflatable Bulldog. The behemonth Bulldog will make it’s debut in the annual Cucumber Festival Parade this Sunday, August 19 and will assist B.E.S.T. in promoting its organization and assisting in fundraising efforts. —photo by Laura Giamattei

BOYCEVILLE — While it may not quite measure up to the multi-story balloons you see each year in Macy’s Thanksgiving Day parade, Boyceville Education Scholarship Trust’s (B.E.S.T.) floating Bulldog Behemoth will be hard to miss in the annual Cucumber Festival Parade this Sunday.

When it comes to helping out, the Boyceville Education Scholarship Trust, better known as B.E.S.T, has been there in order to help graduating students to continue their education to either a four year, two year, or trade school.

The newest member to join in bringing awareness to B.E.S.T. is an inflatable Bulldog that will be displayed during community and school events. The intentions is to bring more awareness to the program, promote the programs within the school, as well as bring the community together using the school’s mascot.

According to Jones, the Bulldog has been in the works over the last two to three months and will be unveiled during Boyceville’s Pickle Parade on August 19, some of the recipients of the award as well as hopeful future recipients will walk with the float during the parade.

Donations through the Community Foundation allowed the Bulldog to be constructed, and with the help of a neighboring business, Landmark of Burnsville MN, the “Bigger than Life” inflatable Bulldog is fully portable and contained in a duffle bag when not on display. For each event, signage can be made to help promote and highlight the event.

Members of Boyceville High School’s graduating class of 1958 took the initiative in 1988 to organize a program to help graduating seniors, and B.E.S.T was started several years later in 1992. The suggestion came from Capt. James Harvey to start the trust, and in doing so close to 381 students have been awarded scholarships since the first financial awards were given in 1995. Since that first year, B.E.S.T. has awarded $200,000 to further educations of Boyceville graduates.