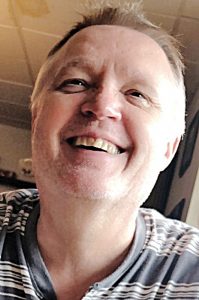 He was born on November 15, 1962 in Bloomer, Wisconsin to Lyle and Inez (Larson) Christianson. He graduated from Colfax High School in 1981 and attended CVTC for an education in police science. He worked with his family at the Colfax Messenger for a number of years. He married Shari Bauer on February 15, 1986 and they moved to Red Wing in 1989. He worked for Munson Printing and, since 2005, has worked for the Goodhue County Sheriff’s Office as a Detention Deputy, where he was well liked and respected. Michael enjoyed watching the Packers and adored his girls and grandchildren.

A memorial service will be at 11 a.m. on Wednesday, August 15, 2018 at the Mahn Family Funeral Home, Bodelson-Mahn Chapel with Reverend Tom Johnson officiating. Visitation will be from 5-8 p.m. on Tuesday, August 14, 2018 and also one hour prior to service, at the funeral home. A graveside service will take place at 1 p.m. on Thursday, August 16, 2018 at the Evergreen Cemetery in Colfax, Wisconsin with a lunch to follow at the Colfax Lutheran Church. Online condolences can be left for the family at www.mahnfamilyfuneralhome.com.