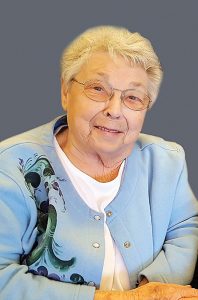 Barbara A. Williams, age 85 of Menomonie, died Tuesday, August 7, 2018 at Neighbors of Dunn County, surrounded by loved ones.

She was born on May 14, 1933 to Ward and Mabel (Mittlestadt) Leach of Menomonie.

Barbara’s childhood favorites were playing Kickety Kick the Can, eating Sunday pie, and family gatherings at holiday time. Spring was her favorite season because of all the blooming flowers.

Barb worked in housekeeping, cooked and baked at the Kernel Restaurant and was a nurses’ assistant at Memorial Hospital and Dunn County Health Care Center.

Barb’s favorite hobbies included birdwatching, painting ceramics, and collecting angels and tins. She and Jim enjoyed getting together with friends to play cards, attending church dinners and going on scenic drives.

The family appreciates the great care given by Mayo Clinic Home Health and Hospice and The Neighbors of Dunn County.