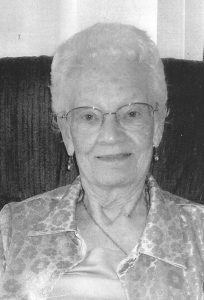 Virginia was born to Carl and Lillian (Lester) Brehm on April 24, 1921 in Knapp, WI. She moved with family to Boyceville, WI when she was six years old, attending Boyceville High School and lived in the Boyceville area all her life.

On August 20, 1938 Virginia married Edward Engebretson. She worked at Walter’s Clothing Store for 10 years and then at Sandy Lee Manufacturing for 20 years, retiring in 1984. Following Edward’s death in 1975 she later married Arthur Bygd on January 15, 1983. They spent their first five years together in Florida during the winters, when Arthur died in 1995.

Virginia was a lifelong member of the United Methodist Church of Boyceville. She enjoyed volunteering at the Boyceville Senior Center for many years. She also enjoyed flower gardening, sewing, crocheting and reading.

Funeral service will be held 11:00 a.m. on Wednesday, August 8, 2018 at the United Methodist Church of Boyceville with Reverend Shannon Mattison officiating. Burial will be in the Tiffany Cemetery in Boyceville. Friends may call at the church one hour prior to services Wednesday. Anderson Funeral Home of Glenwood City is assisting the family.