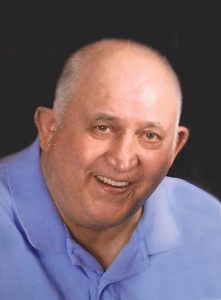 He graduated from Chippewa Falls High School in 1958 and went to work at American Motors in Kenosha, Wisconsin for ten years. He then came back home to begin his dream of milking cows and farming. He retired from farming in 1996. He then went to work for the Eau Claire Press Company until his retirement.

John loved playing cards, especially his daily game of cribbage with Billy every morning at breakfast, as well as his Tuesdays at The Grapevine in Colfax. He loved the Brewers, the Packers, and the Wisconsin Badgers. He also enjoyed an occasional trip to the casino.

Memorial services will be held at 11:00 a.m. Thursday, August 9, 2018 at Colfax Lutheran Church in Colfax, with Pastor Les Walck officiating.  There will be visitation from 4:00 to 7:00 p.m. Wednesday at Olson Funeral Home in Menomonie and at the church one hour prior to the service on Thursday.  Burial will be in Evergreen Cemetery in the Village of Colfax, Dunn Co., WI.