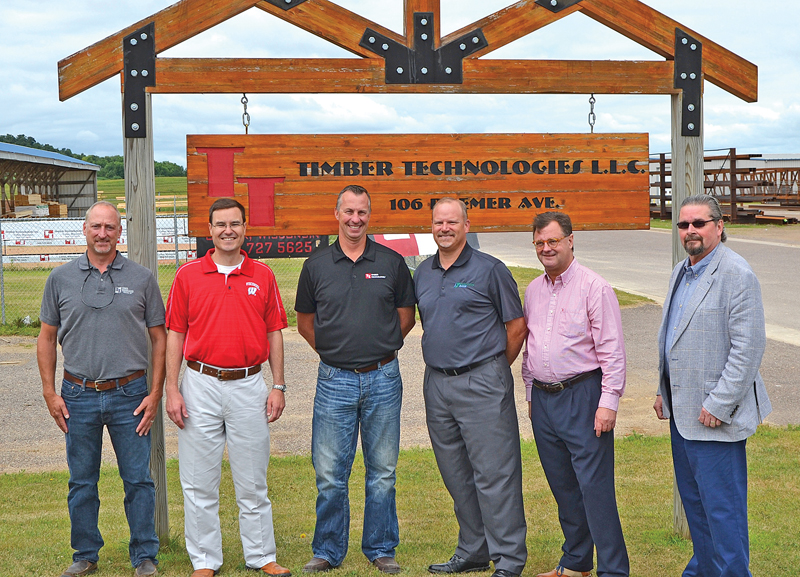 COLFAX  —  Usually Jay Risch, the state secretary of the Department of Financial Institutions, meets with bankers in conference rooms.

The visit to Timber Technologies in Colfax July 26 was part of a field trip to northwestern Wisconsin during which Secretary Risch visited a variety of manufacturers and businesses.

“Usually when we are out and about visiting with folks like Clark (Yolitz of Dairy State Bank), we’re at a bank. But since small business lending is part of what banks do, we find it valuable to get out and see the banks’ customers,” Secretary Risch said.

The Department of Financial Institutions, among other functions, oversees the state’s charter banks.

In addition to Secretary Risch, the visitors at Timber Technologies included Greg Reiman, assistant deputy secretary of the Department of Financial Institutions; MaryAnn Lippert, director of the Northern Office of the Division of Intergovernmental Relations; Eric Turner, executive director of the Dunn County Economic Development Corporation; and Clark Yolitz.

Timber Technologies is owned by Tom Niska and Dale Schiferl.

When fully staffed, Timber Technologies employs 19 people, and the business is planning an expansion that will double the square-footage of the building.

The story of how Niska and Schiferl ended up locating in Colfax is the story of talking to the right people and being in the right place at the right time.

Schiferl lived in South Dakota, and Niska lived in Minnesota. The two men met through the course of their work.

“We hatched a plan and (wrote) a business plan that we were going to do this,” Niska said.

After writing their business plan, they started looking in the LaCrosse area in the year 2000 for a building.

They talked to local authorities in LaCrosse and — “blown off, would that be the right word?” Niska asked.

“Blown off is a strong word,” Schiferl said.

“Well, let’s just say there were bigger fish than us,” Niska said.

“We did get some pointers from them about our business plan that would be more attractive to the economic development corporations. But they didn’t have a lot there for facilities. And that’s what we needed. That why we went down there. We needed a facility,” Schiferl said. 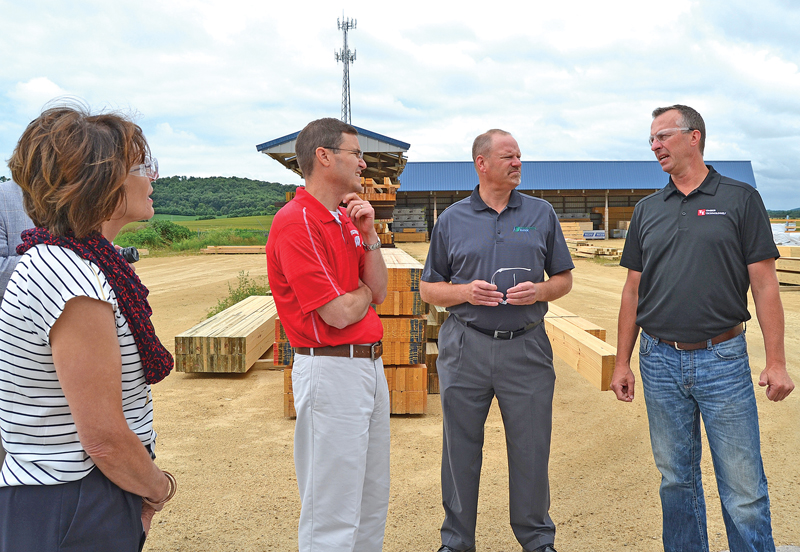 A year and a half later, Niska and Schiferl were ready to try again.

“We went to Eau Claire first. We did the tour around that county looking for buildings. For what we would be making, we needed a certain size building and shape. We spent some time in Eau Claire, but it wasn’t until we ended up in Menomonie (and met) a guy by the name of Bob Bossany (former director of Dunn County Economic Development). He was a hand-holder. And that’s kind of what we needed,” Niska said.

“The first people in Eau Claire said, ‘Yeah, this is great. Who’s going to lend you money?’ Ahhhhh. I don’t know. ‘Well. You’ve got to go talk to a bank.’ So we go talk to a bank, and the first thing the banker would say is, ‘Who else is in on it?’ ‘Got an SBA (Small Business Administration) loan?’ Ummmm. Not yet. So it was a big circle,” Niska said.

“They wouldn’t get together to get behind a project,” Schiferl said.

Bossany, Dave Hovre, “and a couple of local guys” showed them a building available in Colfax, Niska said.

“After we saw the building, they took us right over to Clark’s bank in town here. Clark was the first guy to say, ‘Yes, I think we’re interested, and I know who to contact,’” he said.

“So finally we found a problem-solver that knew, or was willing to spend 10 minutes, on a couple of guys like us. That was part of it. We weren’t big enough fish. Clark got the hand-holding and got us in contact with the SBA, so now they’re in. Now we’ve got the bank and SBA, so we can apply for the (state) block grant, and Bob comes up with the Dunn County Revolving Loan Fund,” Niska said.

Niska and Schiferl purchased the building from the Village of Colfax.

“They were renting it out at the time. It was for sale to the right business, for something they wanted to have come in,” Schiferl said.

The building owned now by Timber Technologies was built in 1993 as a joint venture of the Village of Colfax and the Colfax Industrial Development Corporation at a cost of $300,000.

“The building was as close to the right size and shape as we were going to get. And as an added bonus, Colfax has a rail spur. There was a team track or a public spur, whatever term you want to use,” Niska said.

“Eventually our goal was to get big enough to be buying train cars of our raw products. That was one of things we were looking for too, in Eau Claire and LaCrosse,” he said.

Access to rail “wasn’t our number one priority. But it was number two. And with the Interstate close by, too, that was beneficial. I think about companies like Ashley (Furniture). They’ve grown over the years, but they really struggle to get their product just to the Interstate. We’re lucky here. We’ve got state Highway 40 to 29 and right to 94. The location works well for us,” Schiferl said.

Timber Technologies is, however, struggling with the same problem many other businesses are experiencing — finding people to work.

The labor market is challenging everywhere, but it is even more challenging in a small community because “the pool is shallow to pick from. You’ve got to give them a reason to come into town. We get a lot of people from Menomonie and Eau Claire to work, and a few locals, but not as many as you might think,” Schiferl said.

Since 2003, Timber Technologies has had a couple of expansions and is now planning for another expansion that will double the square-footage and put a roof over the yard.

Niska and Schiferl are working on the necessary permits in order to build the expansion, including a plan for dealing with stormwater runoff.

“The size of the building we want to put in now, you’re disturbing so much dirt, and you have to think about where the water goes. We have to have a plan in place. They’ve had issues where people have not had a plan, and then it creates problems for other development and other businesses trying to grow. And we all want to make sure we’re on the same page,” Schiferl said.

Niska and Schiferl have talked to a representative from the Wisconsin Economic Development Corporation, and they have discovered a problem with the state’s funding model to help businesses.

Funding is tied to the number of jobs a business is going to create, but “that ship has already sailed. We need workers. We don’t need jobs. We need workers,” Niska said.

“The block grant, when we started, was all about how many jobs are you going to create and that will be part of funding (the state) can help with. But now, we can’t fill the jobs. So we’re not looking to create jobs. We’re looking to retain and automate,” Schiferl said.

“We don’t want to eliminate jobs. We want to make them different so it is easier to hire people,” Niska said.

Secretary Risch said this is not the first time they have heard about problems with hiring workers.

“We’ve been hearing that consistent message. We’re taking that back to the governor,” Secretary Risch said.

The funding avenues that are available now eliminate the opportunities, “because we are not looking to increase by 10 or 20 jobs,” Schiferl said.

“They’re starting to talk about it. That’s the same thing we are hearing (elsewhere),” said Reiman, the assistant deputy secretary of the Department of Financial Institutions.

“That’s my two cents worth for the tour. That’s the message I wanted to get across,” Niska said.

“That’s one of the reasons we are doing this is to get that kind of feedback,” Secretary Risch said.

Following the initial discussion of how Timber Technologies got its start and the challenges facing the business now, the group took a tour of the facility.

“This is a lot more fun than sitting in conference room,” Secretary Risch commented.

As part of their efforts to retain workers and to develop a connection with the community, Niska and Schiferl encouraged their employees to do a community project.

The employees decided they wanted to build a new warming house for the ice skating rink at Tom Prince Memorial Park, and Timber Technologies delivered the warming house to the park last winter.

Timber Technologies also has committed to donating the timbers to install the Vietnam Veterans Memorial sign at Tom Prince Memorial Park. The memorial will be dedicated August 30.