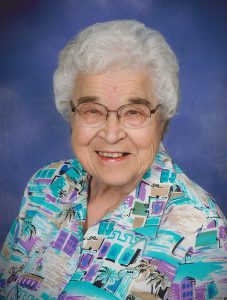 Irene M. Talmage, age 91, of Menomonie, WI passed away Tuesday, July 10, 2018 at The Neighbors of Dunn County in Menomonie.

She was born November 15, 1926 in Eau Claire, WI to Albert and Elfrieda (Redman) Pehlke.  She attended Sherman School and graduated from Memorial High School.

Irene worked as a teller at the American National Bank until her marriage to Richard Talmage on May 8, 1948.  They owned and operated Dick’s Café in Connorsville. On November 15, 1949 they moved to the Pine Grove Dairy Farm on Highway J, and on Ocober. 1, 1981 moved to the next farm.  Farming was her life.

Funeral services were held at 11:00 a.m. Monday, July 16, 2018 at Peace Lutheran Church in Menomonie, with Pastor Bob Friese officiating.  Visitation was at the church one hour prior to the service. Burial was in Sherman Cemetery in the Town of Sherman, Dunn County, WI.  Olson Funeral Home in Menomonie is serving the family.