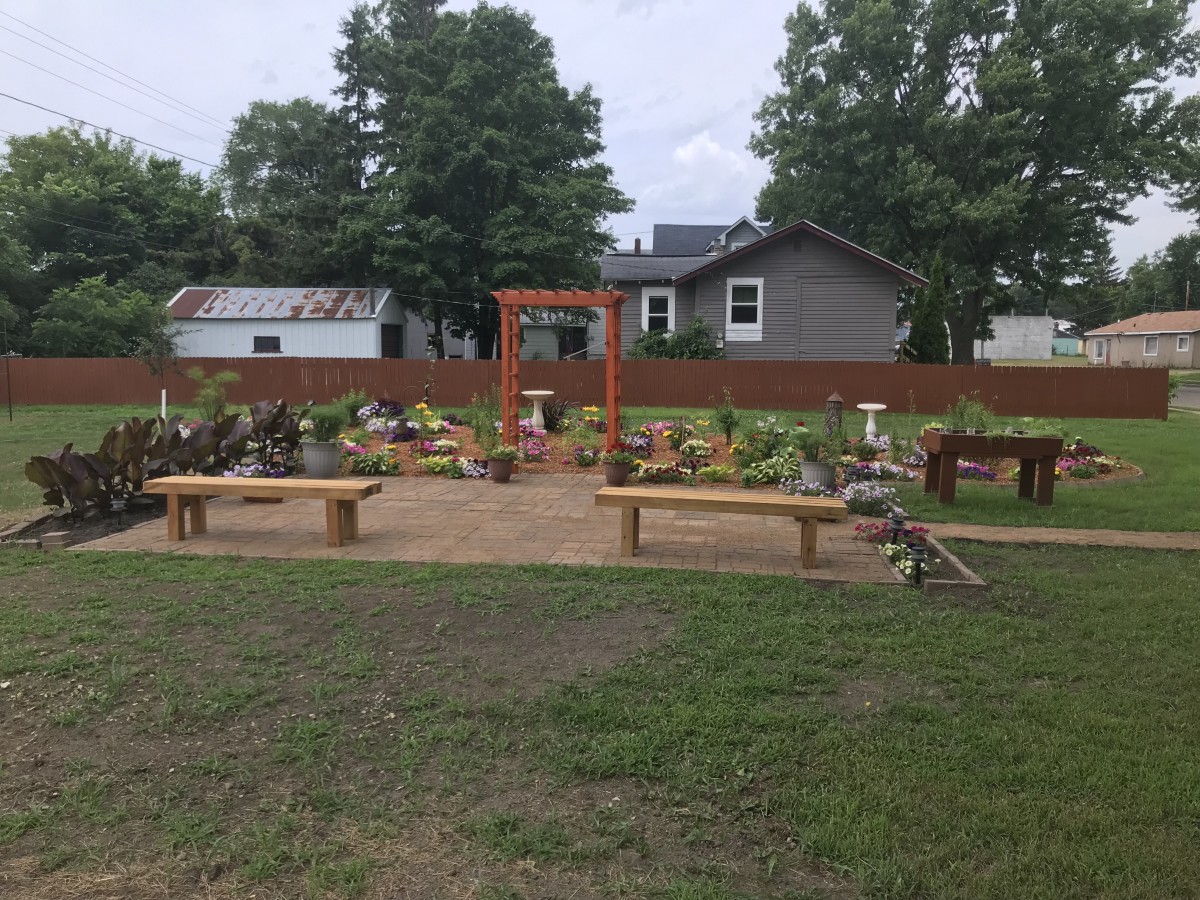 BOYCEVILLE’S “Friendship Garden” that is currently under development at the corner of Main and East Streets in the Village has drawn complaints from an adjacent neighbor. —photo by Shawn DeWitt

It seems that the ongoing community garden project located at the corner of Main and East Streets in Boyceville has drawn the ire of the tenants in the rental property adjacent to the Village-owned lot.

Village resident Trudie Chernak, one of the community garden’s coordinators along with Lonna Borgert who was not at the meeting, and Brenda Mulroy, the owner of the rental property, addressed the Village board during the public comments portion of its regular monthly meeting held Monday evening, July 9.

Chernak, who volunteered to do the “Friendship Garden” as it is called, said that it has turned into a headache, noting that she and others were not aware of the three-foot setback for the fence that was recently constructed between the two properties or the need to have the decorative or finished side of the fencing face outward.

Chernak also noted that others issues have arisen and yielded the floor Mulroy to expound.

Mulroy began her address to the board by telling them that she didn’t know what was going on until she “found out from the tenants who were extremely, extremely upset about some things (concerning the garden).”

Mulroy queried the board why she was never notified or a public hearing was not held.

Board President Gib Krueger said that the Village was not required to hold a hearing or give notice to surrounding property owners because no conditional-use permit was needed to create the community garden.

“I do not have a problem with the way it looks now but I am not sure about a pavilion and picnic tables,” stated Mulroy.

“My concern is it is distracting and upsetting to my tenants.”

Mulroy also addressed the removal of the chain-link fence that once enclosed the property on which the garden now sits.

Mulroy claimed that the former fence actually encroached some 10 to 11 feet on to her rental property which she did not have an issue with until its removal.

Mulroy said that some rather large holes were left in the ground and never filled when the chain-link fence was taken down. She continued by telling the board that her tenant, who Mulroy said was blind, fell into one of those holes.

“I am not sure of the likelihood of a pavilion being built on the property,” Krueger told Mulroy.

“But you have to admit, it hasn’t looked better in 50 years,” added Krueger of the once blighted property.

And Mulroy agreed but wanted to know how far the project was going to go and if the issues would be taken care of.

Later in the meeting, the board returned to the discussion of the community garden.

During that portion of the evening’s agenda, Krueger nixed the building of a pavilion on the community garden site.

Trustee Mary Lagerstrom said that the village already has pavilions at Pafko and Freedom Parks and Krueger noted the School Park may soon see a major   renovation as well.

Chernak asked if she could add a few more benches which the board was fine with.

“But I really would like the property to be remeasured,” said Chernak, so that the fencing could be moved to properly adhere to the ordinance.

The Village president then praised the work Chernak, Borgert and the volunteers have done in a short few months.

“The support and donations to this project have been fantastic, its just seems to keep growing,” said Krueger.

During Police Chief Greg Lamkin’s report to the board, Krueger questioned the chief about vehicles parking on the sidewalk.

Lamkin told Krueger that he was not aware of any vehicles parked on sidewalks in the village.

During their exchange, Krueger revealed that a truck had been parked for some time on a sidewalk along Tiffany Street and that there was now garbage bags piled next it. Trustee Lagerstrom stated that she has had to walk onto the street to get around the vehicle in question.

Further discussion revealed that the truck was actually parked in the owner’s driveway but was blocking the sidewalk.

Chief Lamkin said that it was a driveway and the person was entitled to park vehicles on the driveway.

Krueger disagreed saying that it should not block access and use of the sidewalk.

Lamkin said that he would consult the ordinances and look into the matter.

Krueger then asked what the chief would do if someone was parked in a handicap spot.

Lamkin replied, saying that he would ticket the individual if they did not have a proper handicap placard or license plate.

Lamkin then asked where this was taking place to which Krueger replied, “walk out the back door of your office.”

Krueger claimed that the squad car had been parking in the handicap spot and said that there were others areas nearby to park the squad.

A discussion ensued between the two with Krueger asking the police department not to park in the handicap spot.

In a 3-2 split decision, the board granted Randy Platson a 3-week extension to camp in Freedom Park.

Krueger said he had a lengthy discussion with Platson and moved to grant the extension with a second from trustee Keith Sorensen. Krueger, Sorensen and Jonathan Farrell voted yes with Bud Gilbertson and Mary Lagerstrom dissenting.

Chief Lamkin will inform Platson of the extension and the need to vacate the park by noon on August 3.

In other action, the board accepted the resignation of trustee John Hellmann. President Krueger said that Hellmann served the village well while on the board and would be missed.

In other action, the board approved:

• A Class B Temporary Picnic License for the Boyceville Firefighters Association, August 17-19, 2018.

• Police Chief Greg Lamkin as a co-zoning administrator for the village.

Peter Score elected as chair of Boyceville ambulance district board