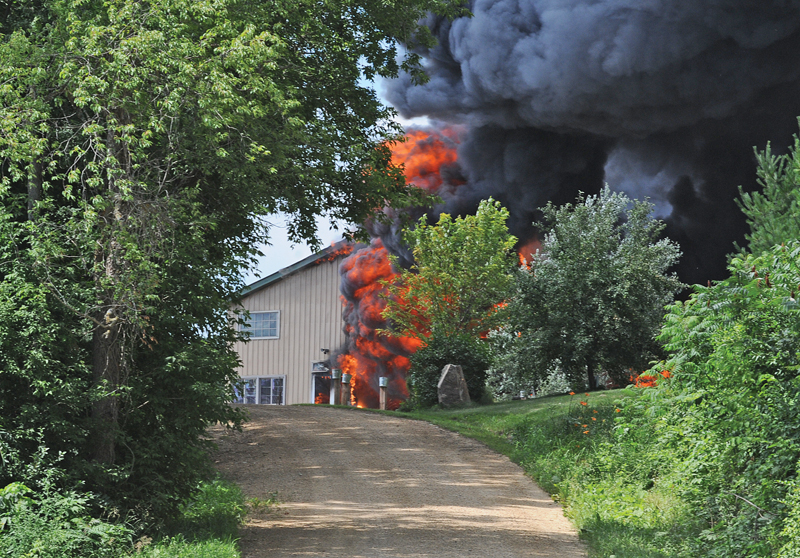 A LARGE VOLUME OF FIRE greeted local firefighters as the arrived at the home of Dahl Well Drilling on Hagen Road in Glenwood Township Monday afternoon. Six area fire departments were involved in fighting the flames. —photo by Shawn DeWitt

The business owner, Andy Dahl, stated that no one was in the facility at the time of the fire and that his daughter called him to report that the building was on fire.

The St. Croix County Communications Center paged out the Glenwood City Fire Department at 3:04 p.m. Monday, July 9th and by the time they arrived the entire 50 by 80 foot building was totally involved in flames. The property is located at 1236 Hagen Road, just off County Highway DD in Glenwood Township, about four miles southwest of the fire station. Firefighters noted that there were several small explosions from containers stored within the structure.

Fire Department’s tank trucks transported water from the city’s fire hydrants to the scene. Firefighters were on the scene for almost four hours.

With the hot humid weather firefighters became exhausted in a very short time and local ambulance personnel were on  hand to check on the condition of the firefighters, but luckily no injuries were reported. No other buildings at that location were damaged by the fire.

Not only was the building lost, but also company records, tools and equipment along with two classic Chevrolet pickups that Dahl had restored. The cause of the fire has not yet been determined and the facility was covered by insurance. Fire officials gave praise to the many people that brought water for firefighters to drink and cool their heated bodies from the exhausting work.