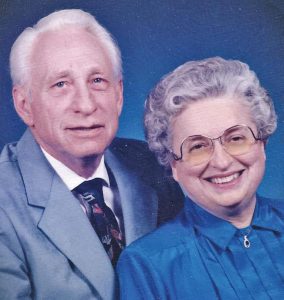 Donald was born in Neillsville, WI on August 29th, 1931 of Arthur Dewey and Ruby Frances Zittleman. Ann was born in Chippewa Falls, WI on September 30th, 1932 of Louis and Alberta Ritzinger. Don was a graduate of Menomonie High School, and Ann graduated from McDonell Central Catholic High School in Chippewa Falls.  They met while attending Stout Institute in Menomonie, WI.  Don took time out of his college education to serve in Japan in the Army as a heavy machinery mechanic during the Korean conflict.  He was honorably discharged and returned to Stout to finish his Bachelor’s degree as well as a Master’s Degree.  Don and Ann married in 1955 and then moved to Michigan in 1956, an event which was reported in the Colfax Messenger on August 23rd, 1956.  They made their way to Taylor, MI in 1958 where they made their home and careers until they passed from this life, Don on May 11th and Ann on May 25th, 2018.

Don taught industrial arts in the nearby Allen Park High School.   Ann was a registered dietician at Heritage Hospital in Taylor, a member of the board of the Michigan Dietetic Association for a number of years, and a nutrition spokesperson for eleven years on a local cable TV program, Food For Health.  Even so, they spent several months of every summer at their beloved Zittleman cottage in Colfax, WI.