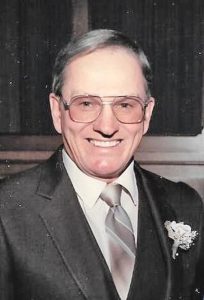 Mervin Rediger, 82, of Bloomer, passed away on Tuesday, June 12, 2018, at Colfax Health & Rehabilitation Center in Colfax.

Mervin Rediger was born on an exceptionally hot day, the 21st of May 1936, to Amanda Berg and George Rediger. He was the baby, the youngest of seven, and his mother commented that Mervin was “a good boy.” Mervin attended grades 1-8 at the Auburn Country School not far from his parent’s farm; later, the school bus took him to Bloomer High School. Mervin had to rise early and help with barn chores. There were no showers in those days, and he carried “the essence” of the barn with him. To many classmates, it defined him.

After high school, Mervin enlisted in the Army and served for three years. Military Service proved a real learning experience. He often spoke of his pride in being the driver for his commanding Colonel; he also deployed to the Marshall Islands where he served as a clerk typist.

Upon his discharge from the Army, Mervin moved back to Bloomer and lived with his folks. He worked at Stelters Feed Mill, Frank’s Grocery Store, hauled can milk, and drove school bus. In 1959, Mervin met and married the girl across the street, Carole Rufledt. His brother Arnold persuaded him to purchase Arnold’s father-in-law’s farm; Mervin and Carole labeled their new home “Rediger’s Rolling Acres.” While the farmstead resembled The Little House on the Prairie – it was quite primitive – Mervin was ambitious and made many improvements, which included building an entirely new house in 1980. He truly was a Hero to his three daughters, Kim, Jackie, and Cindy. A lasting gift to his girls was his incredible work ethic.

The arrival of grandchildren was a significant blessing for Mervin and Carole. Early on, their eldest grandson heard the horn of Mervin’s tractor and began addressing them as Grandma & Grandpa “Beep”.  This beloved nickname continues by all grandchildren to this very day, even in written correspondence and mail.

Mervin loved spending time with family and friends. He especially enjoyed snowmobiling, fishing, and hunting, and he took six trips out west hunting. After the girls grew up, Mervin and Carole traveled frequently all over Wisconsin and Minnesota. A trip to Washington, DC, and another to Yellowstone and the Grand Tetons were some of the highlights of the empty nester years.

Mervin was a true handy man with a passion for woodworking. Over the years, he made several lasting treasures for family and friends. As an example, he created a couple of “jitneys” for his grandchildren and a neighbor; these modified barrel-trailers could be towed by a riding lawn mower proving great fun for all. His creations were always exceptional, the work of a real craftsman.

Mervin served on the church council at St. Paul’s Lutheran Church and on the Auburn Town Board for many years. He was an excellent dairy farmer and raised beef for several years after the dairy herd was sold in 2000. Mervin was a zealous advocate of the John Deere brand, especially John Deere tractors. One of his two snowmobiles was manufactured by John Deere, and his homemade jitney trailers were proudly painted John Deere Green.

While he was not a large man, Mervin was exceptionally tough. In 1994, Mervin fell in the barn and fractured his knee cap. His surgeon stated “It’s a very grave injury,” wired the knee cap together and told Mervin, “It’s up to God and you.” Facing a distinct possibility of permanent disability, Mervin got about the business of healing and fully recovered after many long months of rehabilitation. Mervin and Carole were so thankful to all the friends and family that helped manage the farm and assist the family during Mervin’s recovery, especially Paul Leverance of Agribility.

It was Paul who recommended a John Deere Gator to enable Mervin to continue farming after his injury. The gator proved a cherished component of Mervin and Carole’s life during their last years farming and into retirement. Almost daily (and weather permitting), Mervin and Carole took Gator rides through the fields and woods of their scenic farm, a simple but wonderful pleasure.

Mervin experienced many health concerns over the years and faced his toughest challenge when diagnosed with Alzheimer’s. Due to the impact of this dreadful disease, in 2009, Mervin and Carole left their beloved Rediger’s Rolling Acres and moved into the city of Bloomer. In 2010, Mervin moved to The Colfax Memory Center. For a period of time, Mervin and his brother Robert were able to share a room. The entire staff at the Memory Center are wonderful – Carole refers to them as “Angels” – and Mervin’s family is incredibly thankful for the excellent level of care he received during his final years.  The Long Good-bye lasted until June 12th, 2018.

Mervin was preceded in death by his parents, George and Amanda; brothers, Delbert, Arnold, and Robert Rediger; and sisters, Velna Oldenberg and Mavis Steinmetz.

A private family inurnment will be held at the Northern Wisconsin Veterans Memorial Cemetery in Spooner. A Memorial Service will be held in 2019 when Mervin’s grandson returns from an overseas military deployment.