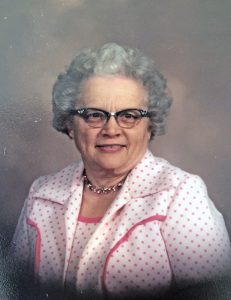 Javerna Fjelsted, age 93, of Colfax, passed away on May 22, 2018, at Colfax Health & Rehabilitation Center.

Javerna was born on October 14, 1924, to Alvin and Clara (Dahl) Fjelsted. She lived with her parents on the farm east of Colfax until the 1958 tornado demolished the entire property. Her parents rebuilt in the Village of Colfax where Javerna lived until her recent admission to the nursing home in 2015.

She is remembered by many for her 35 years of employment at the Colfax Farmers Store. After retiring there, she worked part time for Attorney Jim Sperstad and Security Agency.

Javerna’s love for her Savior was the most important part of her life. She taught Sunday School and played piano at church. She is remembered by her kindness in baking angel food cake to share with shut-ins and delivering Daily Bread devotionals to numerous people. She also volunteered at the nursing home, setting up the monthly birthday baskets for the residents.

Her sweet smile and wit will be missed.

She is survived by her sister-in-law, Ethel Nelson; and many nieces and nephews.

She was preceded in death by her parents, Alvin and Clara Fjelsted; brothers, Clifford, Spencer and Donald; and sister, Orpha Olson.

Her family would like to thank Colfax Health and Rehab for the loving care they gave her in the last 2 ½ years of her life.

A funeral service will be held at 11:00 a.m. on Wednesday, May 30, 2018, at Sampson Funeral Home, 1017 Railroad Ave, Colfax, with Pastor Bob Koepp officiating. Visitation will be from 9:00 a.m. until the time of the service at the funeral home. Burial will take place in Lower Running Valley Cemetery, Colfax.