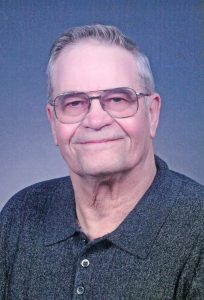 Jerry was born August 21, 1934 in Chippewa Falls, WI to Alfred and Alice (Krug) Riek. He was raised in Boyceville where he graduated in 1952. Jerry was a four sport athlete and earned 16 letters. His love for sports and athletic abilities was passed on for many generations. Jerry enjoyed sharing many stories about his lifelong love of sports. One of his proudest moments was winning a state title with the relay team in track. He was not only an excellent athlete, he was a knowledgeable student of many sports. He was so proud of his children and grandchildren in their sports and academic accomplishments and  was their biggest fan, he would read, clip and save any article and later share with his friends.

Along with loving sports and his family, he enjoyed being outdoors, spending it hunting and fishing. Jerry had a strong passion for farming and pulling horses. He was a fan of all the Wisconsin sports teams and extremely proud to be a shareholder of the Packers. As a family we enjoyed watching and listening to him recall his baseball and fastpitch highlights as a young adult. If he wasn’t attending a sporting event, we could usually find him at a chair at Buckshots or a stool at the casino.

Jerry served in the US Army in Korea from 1952 to 1955. On February 17, 1956 Jerry married Arlene Huley in Boyceville. He served as as a volunteer fire fighter for many years in Boyceville. He worked many years for Hedlund’s and Freiburg’s Farm Equipment until retiring from Freiburg’s. He also drove bus for Boyceville School District for 17 years.

Jerry is preceded in death by his parents Alfred and Alice Riek.

Funeral services will be held 11:00 a.m. Wednesday, May 16, 2018 at Holy Trinity Lutheran Church with Reverend Curtis Brooks officiating. Burial will be in the Tiffany Cemetery Boyceville, WI. Friends may call at the Anderson Funeral Home in Glenwood City on Tuesday, May 15, 2018 from 4 to 8 p.m. and one hour prior to services Wednesday at church.