COLFAX — Colfax High School softball head coach John Dickinsen says the strength of the girls’ team this year will be the experience of the returning players.

With eight returning players, “we have a lot of experience back and will lean on those players to help our younger girls grow,” Dickinsen said.

“We have many athletic girls that will make for a solid defensive team. We need to work hard offensively to keep our bats better and be aggressive on the basepaths,” he said.

The Colfax softball team had an overall record last year of 9-10, and a conference record of 9-9.

This is Dickinsen’s first year as head coach for softball as he takes over from Rich Meredith, who is an assistant coach this year along with Lori Buchanan.

Out of the 2017 team, Mikaela Leibfried and Kameri Meredith were Second Team All Conference, and Kaitlyn Field was Honorable Mention All Conference.

“Dailyn was a solid outfielder for us. We will need some players to step up for us in the outfield this year,” Dickinsen said.

The softball team’s goal for this year “is to play consistent softball and compete for the DSC Championship,” Dickinsen said.

“Through tradition and players coming back, I think that Elk Mound is the favorite for the DSC. After Elk Mound, I believe there are a lot of teams that can be competitive. Last year, there were six teams ranging from 13-5 to 9-9 — Durand, Glenwood City, Pepin/Alma, Boyceville, Mondovi and Colfax — in the DSC,” he said. 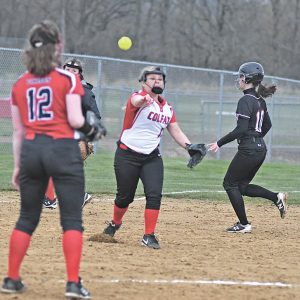