Well, another fall sports season has come to rest while another winter season has begun. For the most part, both Colfax and Elk Mound were successful in all three sports including the Colfax volleyball team winning another conference championship as well as a regional championship for the first time in years.

The Vikings lost to Cameron who went on to win the sectional before losing their first game at state. Cameron was led by 6’3 Hannah Bailey, who will play college ball at Division 1 Iowa State next fall. Bailey was the third leading scorer on the Comet basketball team last year and has decided not to play this year so she can continue to hone her volleyball skills.

With a slug of seniors, the Mounder volleyball team cruised through conference play until their final matchup against Colfax. The final loss to Eau Claire Regis in the second round of regionals also turned out to be the final game coached by Donna Weix, as she gave her resignation notice to the school board last month. Weix was the varsity coach for 25 seasons after working as an assistant for several years for Elk Mound.

The Viking football team continues to make progress, having reached the playoffs for the second consecutive year, but they can’t seem to get over the hump and win that first playoff game. Hopefully the success they have shown is an inspiration to the younger kids and they will continue to hit the weights in the off season. Elk Mound still had a rather young team this year but you can be sure those youngsters will be bigger, faster and stronger next fall and will turn the corner and bring that program back to playoff form.

Both schools had runners represented at the state cross country meet with Elk Mound having their first girl, Elizabeth Fasbender who is just a sophomore, compete. The Mounders also had one boy, Caleb Kruger, who was the second boy for the Mounders in the few short years of the program compete while the Viking’s lone qualifier, Abbagail Schotter is just a sophomore.

While updating my fall college athletes, I noticed Sarah McMahon did not compete on the cross country team for Bradley University this fall. Sarah struggled with hip problems last spring and ended up having surgery on a torn labral muscle at the famous Steadman Clinic in Colorado this fall. She will undergo therapy for at least six months and will miss indoor and outdoor track, but plans on competing in her senior year next year.

There are plenty of college basketball athletes from our area you can follow this winter by checking school websites or getting to their games. Colfax has senior Lewis Mau starting for the UW-Eau Claire Bluegolds while Jared Miller is also getting some playing time for them after taking a couple of years off. Lane Olson is a member of the UM-Duluth team while Cody Zivcic (listed as Dakota on the roster) moved from UW-Barron County to UW-Superior. Ethin Kiekhafer of Colfax is a freshman on the Viterbo University basketball team.

Lachlan Hinwood will run indoor track for Macalester College in the Twin Cities now that cross country is over.

A pair of Doucette girls are making sure their mom and dad are putting lots of miles on their vehicles including Sammy who is finishing her senior season for St. Scholastica. Sammy just played a couple of games at UW-Stout  Nov. 29-30. Little sister Mallie has been getting playing time for Minnesota State-Morehead and scored her first collegiate points on a three point shot while playing in a tournament in California. Now that would have been a nice place to be for a game instead of back here in our extremely cold weather! Jenni Gust is a pre-season favorite to be All Conference for her Lenoir Rhyne team in North Carolina. I’m told she is sporting a pretty fancy ring after her team won the South Atlantic Conference Championship last season. Sam Yolitz is a member of the Carroll (WI) College team, Braanna Steen plays for the University of Dubuque in Iowa and Ryleigh Prochnow, after taking a year off from competition, tried out for the UW-LaCrosse team and is on their roster.

Elk Mound has Josie Hayes playing her second season for UW-River Falls and Zach Doll, the D-SC Conference player of the year for the boys a year ago, is a member of the UW-Stout team. Josie’s twin sister Emma, just completed her cross country season and will run indoor track at UW-River Falls.

It appears former Colfax assistant girls’ basketball coach Mick Hover can’t stay away from the court, as he is now the varsity coach for the Barron girls. Too bad we don’t get a chance to play them at the AAU Holiday tournament this December but Colfax will play Minneapolis DeLaSalle again on Dec. 29 and Northwood Dec. 30.

Best of luck to all our teams this winter and let’s hope we have a conference, regional and sectional champion among us in basketball as well as wrestling. And as most of you are hoping, a Super Bowl Champion!

Vikings crush Cardinals in only game of the week 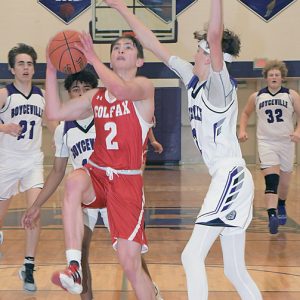 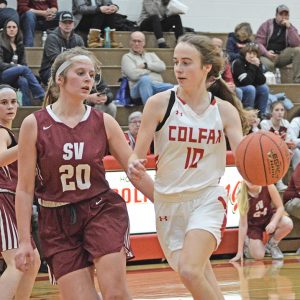