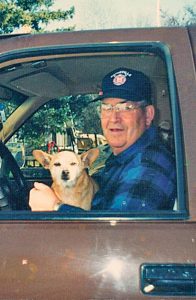 Virgil is shown in his truck, which was his pride and joy, along with his beloved dog, Mitzie. They had a special bond for thirteen years. She passed away shortly after this picture was taken.

Virgil is preceded in death by his parents, Earl and Delores Robinson; brothers: Irvin, Richard, Karlton Robinson and Kenneth Martin;  his sister, Karen; sister-in-law, Kathy Grimm and the untimely death of some of the younger, extended members of the family.

Before our marriage, Virgil spent time in the Army. He loved to tell stories about his adventures and travels, especially when he was stationed in Hawaii.

Two days before our marriage, a junked car fell on Virgil. Instead of a church wedding, we were married on August 17, 1963 at the old Memorial Hospital in Menomonie.

Virgil loved being a part of the Boyceville Community, and showed that by contributing as much as he could to our small town. These contributions included: serving on the village board, as a school crossing guard and janitor, being a proud member of both the Boyceville American Legion Post 314 and Trinity Lutheran Church, as well as driving firetruck and ambulance. He was self-taught in mechanic and electrical work and assisted many community members by fixing their cars, trucks, lawnmowers and tractors. He was honored to help the local electric companies restore power around Menonomonie after the major windstorm in 1980.

Virgil could often be seen walking around Boyceville smiling, waving and stopping to chat. He also enjoyed very much meeting up with his town buddies, especially when they would “shake dice” to see who would be the next person to pay for a round of coffee.

Virgil loved family gatherings, playing cards, watching the Packers, being with Mitzie and spending time with his grandchildren.

Virgil’s memory loss changed everything. In 2006 he could no longer (alone) do all that he loved and worked for his entire life.  Alzheimer’s has claimed the lives of many friends and relatives; I believe they are in Heaven with their health and memory restored.

A Spring burial will be taking place at 11:00 AM on Saturday, May 19, 2018 at Lucas Cemetery for all relatives. It will be followed by a Celebration of Virgil’s life from 12:30-2:30 at Trinity Lutheran Church in Boyceville. Anyone who knew Virgil is welcome to attend.