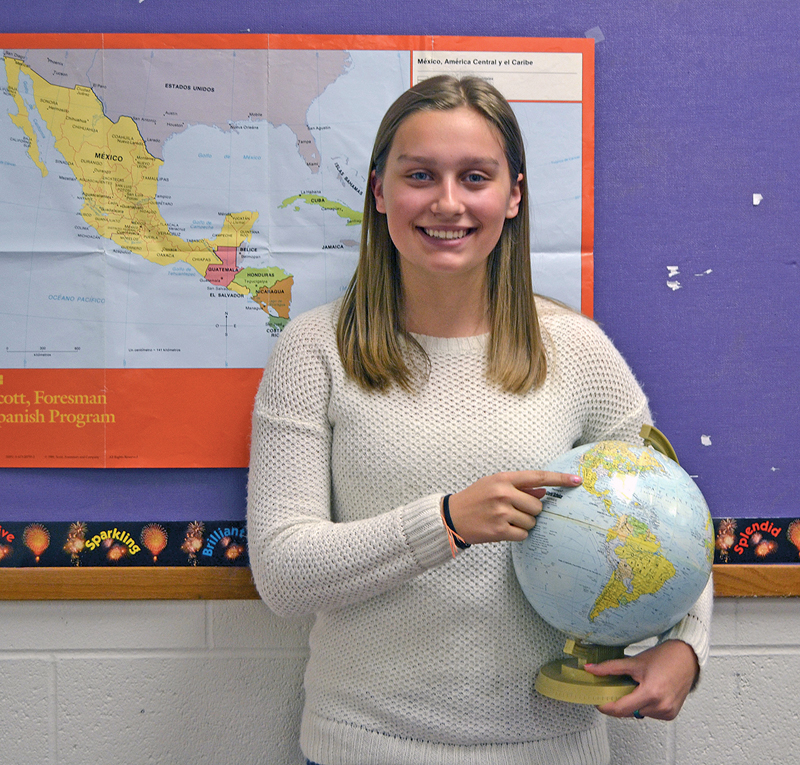 HEADED FOR MEXICO — Kaylee Hessler, a freshman at Boyceville High School, will leave for Mexico in August as part of the World Heritage Student Exchange foreign exchange program. Kaylee has received a 100 percent scholarship through World Heritage Student Exchange for her year in Mexico. She is the daughter of Josh and Larinda Hessler. Kaylee is believed to be the first-ever student from Boyceville to go abroad as a foreign exchange student. —photo by LeAnn R. Ralph

BOYCEVILLE  — Kaylee Hessler, a freshman at Boyceville High School, is about the embark on the adventure of a lifetime.

Kaylee has received a full scholarship from World Heritage Student Exchange and will be living in Mexico with a host family for the 2018-2019 school year.

“I chose Mexico as my first choice because I like the Mexican and Spanish culture. I want to experience some of their festivals. And it’s warm too!” Kaylee said.

Kaylee is the daughter of Josh and Larinda Hessler of Boyceville.

“Our organization has been around for over 30 years. One of the founding members was Walter Danielson, and the scholarship is in his honor,” she said.

“The scholarship pays for everything. The recipient of the scholarship must show tenacity, a student who shows they are committed to the program,” Thomas said.

“I know that the family has been thinking about it and talking about it. They approached, and I strongly recommended she apply for it. I felt she had a good chance to get it,” she said.

The World Heritage Student Exchange team in Mexico is currently working on lining up a host family for Kaylee.

“We have a diligent group. We know she is going to be in a good environment and a healthy and safe environment,” Thomas said.

“We place 1,000 students every year coming into the United States from 40 different countries. We are really trying hard to find American students who want to go abroad. We have several students who have scholarships through our organization,” she said.

“We are hoping, over time, and with Kaylee going and having a successful year, having a wonderful time, and having a lot of stories to tell when she comes back, that it will encourage our students to go more,” Thomas said.

“The idea behind the program is cultural understanding between people,” she noted.

As far as anyone can tell, Kaylee is the first Boyceville High School student to go abroad for a year.

Larinda Hessler said they have been working with the guidance counselor to make sure Kaylee will be able to graduate on time with her class.

“They’re a little lost, too, because they’ve never had a student be a foreign exchange student, so they’re not sure what it will look like for credits,” she said.

“The school said they would work with us as much as possible, and she should be able to graduate with her class,” Larinda said.

“That’s another reason I’m glad you were able to do this. Our small schools are always opening their doors for incoming students, and our students (from small schools) are not going out,” Thomas said.

“I read a statistic that if you can speak Spanish, you can communicate with 80 percent of the world. And I thought that was pretty interesting. So I thought it would be cool to learn Spanish,” Kaylee said.

Kaylee took Spanish in middle school, and she also is enrolled in Spanish at Boyceville High School.

“I’ve always had an interest in Spanish,” she said.

“She watched Dora the Explorer when she was little,” Larinda said with a laugh.

“Her biggest fear is going there and not knowing at all what they are saying, Semone said that within two months, she’ll become pretty fluent,” Larinda said.

“She’ll be fluent in two months. She already has two years under her belt. It will be easy. Spanish is one of the easiest languages to learn. English is the hardest,” Thomas said.

“I’m sure for the first two months, I’ll have to play a lot of Charades,” Kaylee said.

Students in foreign exchange programs are encouraged to bring recipes with them for authentic food from their home country to share with their host families.

Kaylee says she likes a hotdish with peas and meat and mac and cheese.

“I told her she’d have to learn how to make Tater Tot hotdish because that’s the ultimate Midwestern dish,” Larinda said.

“And I want to bring that cauliflower hotdish with bacon,” Kaylee said.

The students also are encouraged to learn about the food in their host culture.

Larinda wants Kaylee to learn how to make homemade tortillas.

“I don’t like buying them in the store. They have all kinds of preservatives,” Larinda said.

Thomas wondered if it was “big news” in the Boyceville school district that Kaylee will be living in Mexico for a year.

Kaylee said her friends are excited she is going but they are also sad because they do not want her to be away for that long.

Out of all of the holidays in Mexico, Kaylee is especially looking forward to Dia de los Muertos — Day of the Dead.

Deceased family members are honored during this holiday, and an “ofrenda” or offering containing pictures of the deceased, food and objects is placed on an altar.

“They say that’s the day the spirit of the deceased can come back and celebrate with the family. They have a celebration, singing and dancing,” Larinda said.

“They put marigold flowers out so there is a clear path to their house,” Kaylee said.

Kaylee plans to bring a picture of her grandmother for Dia de los Muertos, which begins this year on October 31 and ends November 2.

Kaylee will leave for Mexico in August, and she will return to Boyceville next June.

Tiffany Street issues being worked out in Boyceville