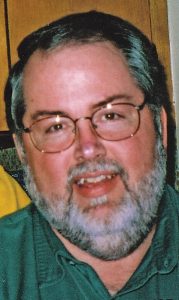 Terry was born on August 10, 1950 to Gilman and Dolores (Holm) Nelson in Eau Claire.  He graduated from Elk Mound High School in 1968, where he lived for his entire life.  He worked for Gateway foods for many years, was a used car salesman, and operated Toli’s Gun Store in Colfax.

Terry married Paula Wenzel in 1977 in Chippewa Falls and they were best friends for 44 years.  He was a natural born storyteller, and loved to talk to people.  Terry enjoyed; collecting guns, hunting, fishing, and trips to Canada with his friends.

A celebration of life will be held for Terry on Saturday, September 11, 2021 at Sampson Funeral Home in Colfax from 2:00 p.m. until 4:00 p.m.  A private burial will take place at a later date in Barum Cemetery with Pastor Hal Schroetter officiating.

Arrangements were entrusted to Sampson Funeral Home.  Online condolences may be left for Terry’s family at www.sampsonfuneralhome.com.