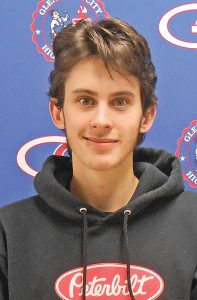 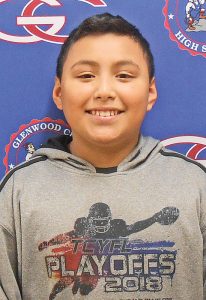 Glenwood City High/Middle School is proud to announce the November Students of the Month.   The character trait that served as the focus for the month was cooperation; students who demonstrated a willingness to help others regardless of the circumstances and did so without ulterior motives, were the focal point for the month. Each of the students that were nominated throughout the month exhibited the characteristics of cooperation in a selfless manner, helping to solidify a positive school culture.

The November Student of the Month at Glenwood City High School is senior, Nolan Stodola. Nolan was nominated by Mr. Wannemacher, technology education instructor. In recognizing Nolan, Mr. Wannemacher stated, “I don’t know of anyone that does not get along well with Nolan Stodola. He is easy going, very polite and is always thinking of others. Nolan is also good at de-escalating stressful situations by using humor and kindness. When working in a team, Nolan always pulls his own weight and is more than willing to listen to other’s ideas. When needed, Nolan finds tactful ways of making suggestions, while always being careful to not offend. Nolan respects others and is well respected. I can think of no reason as to why this likable young man should not receive this award.” Nolan is the son of Kelly Clark and Josh Stodola.

The November Student of the Month at Glenwood City Middle School is sixth grader, Freddy Leandro-Mendez.  Freddy was recognized by Ms. Minor who shared, “Freddy is always willing to help others. He encourages classmates to participate, and he motivates them to do their best. Freddy is a cooperative team member – doing his part while also allowing others to do theirs. Freddy always has a positive attitude, and he brings out the best in others.”  Freddy is the son of Reyna Mendez and Odilon Leandro.

Students of the Month are acknowledged by having lunch provided for them and a friend, as well as being issued a unique piece of Hilltopper apparel.  In addition, students are provided with preferential parking (for them or a family member).

We would also like to recognize the following students who were nominated in this past month for exhibiting the characteristics associated with cooperation – Annika Bauman by Mr. Letter; Riley Berends by Mr. Lamb; Izabella Rassbach by Ms. Jones; Aiden Voeltz by Mr. VanderWaal; Allaina Johnson by Ms. Schutz and Natasha Lagerstrom by Ms. Hierlmeier.