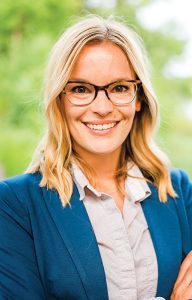 COLFAX  —  Wren Keturi is the Democratic candidate on the November 6 ballot for representative of the state’s 67th Assembly District.

Keturi grew up Chillicothe, Illinois, and graduated from Illinois Valley Central High School in 2007. She graduated from UW-Madison with an undergraduate degree in Gender and Women’s Studies and also obtained a master’s degree in Public Health.

Keturi lives in Chippewa Falls and is the former Director of Communications for AFT-Wisconsin (American Federation of Teachers).

The Colfax Messenger and the Glenwood City Tribune Press Reporter sent out a questionnaire to the candidates for the 67th Assembly District.

Rob Summerfield, the Republican candidate on the ballot, is the incumbent representative for the 67th Assembly District.

Here are Keturi’s answers to the questionnaire:

• From your point of view, what are the top three issues facing the state of Wisconsin and how would you approach those issues?

The most pressing issues we face in Wisconsin all boil down to one question: how do we create economic prosperity in all 72 counties? I believe we can make sure that everyone has a fair shot at a prosperous future, regardless of zip code, when we reinvest in public education, when we ensure that everyone can access affordable healthcare, and when we upgrade our roads and bridges.

• What are the top three issues facing the 67th Assembly District? If the issues for the state and the 67th are the same, talk a little bit about some aspect that is different for state-wide versus assembly district.

Our singular focus on growth in the southeast corner of the state has been damaging to our rural economies. In the 67th, we must focus on the issues that help grow a thriving rural economy. Farmers in our district face incredible challenges, and we must make it a top priority to help them better weather the current business conditions. Additionally, to attract talent and growth to our region, we must have expanded rural broadband, excellent rural school districts, and safe roads and bridges.

I decided to run for office after I became frustrated at seeing special interests write our laws. Your representative should be accountable to you, and not to lobbyists. We need leadership that asks their constituents how to solve problems. That’s why I’ve been making an effort to be at town board meetings across the district. That’s where the rubber hits the road of governance, and if we want effective problem solving, we need to empower our local elected officials with the tools and resources needed to best do their jobs.

• Other comments/Is there anything else you would like residents in  67th Assembly District to know?

I’ve spent my career listening to and advocating for working families, and over the past several months, I’ve crisscrossed the district doing the same. My primary goal if elected will be to bring the concerns and ideas of the residents of the  67th to Madison. When our elected officials listen more to their constituents and less to lobbyists, we can build strong economies in all 72 counties.