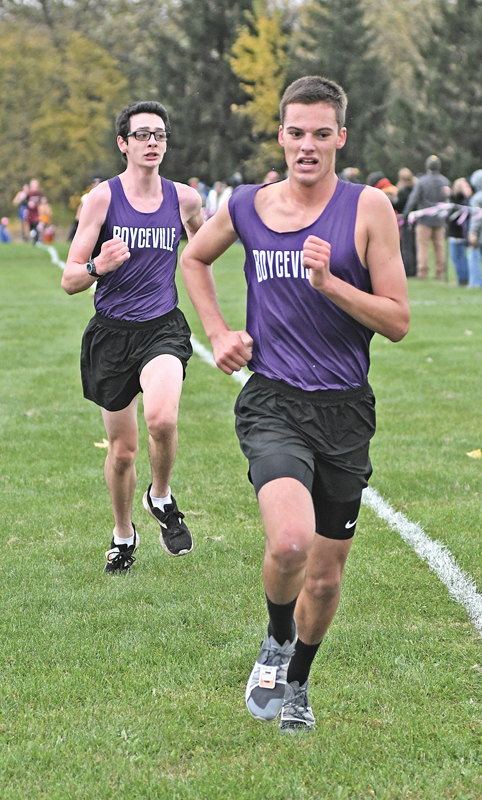 BOYCEVILLE – Although the weather conditions were less than stellar at one of the coldest, windiest Dunn-St. Croix cross country meets held in recent history, the Bulldogs persevered and excelled.

According to Boyceville head coach Corey Day, “Every single athlete ran personal bests in the wind and cold.” He went on to say, “I guess I could say I was very happy with the effort just disappointed with the result.  We had beat teams earlier in the year that beat us at the end.  One more week to stay hungry and try to beat one of those teams.”

The Boyceville boys’ team finished fifth in a field of eight teams with 110 points.

Sophomore Nathan Corr ran a lifetime best of 18:10.02 which put him in the ninth spot at the finish line and put him on the second team for all-conference honors. He was the only Boyceville athlete to earn the coveted honor.

Junior Steven Rasmussen was the next Bulldog to cross the line in just over 19 minutes in 16th place. Junior Cade Klefstad and freshman Brian Johnson crossed the line in under nineteen and a half minutes in the 25th and 26th positions, respectively.

While sophomore Nathan Chich rounded out the top five in 34th place, sophomores Sam Chich and Kaiden Standaert were next to finish for the Bulldogs while freshman Elijah Farrell was the last Bulldog to cross the line.

The girls, who haven’t had a complete team all year, ran three runners.

LONG STRIDES — Boyceville sophomore Nathan Corr sprints toward the finish line as he was the first Bulldog to complete the boys race at the Dunn-St. Croix conference cross country meet in Boyceville last Thursday. Corr set a career-best time of 18:10.02 to finish tenth and grab a spot on the all-conference second team. —photo by Shawn DeWitt

Junior Noelle Wheeldon was the first to cross the line in 34th place with a time of 25:04.74. Next it was fellow junior Rachel Becker followed by senior exchange student Ade Harpil, who finished the race holding one shoe as it came off during the race.

The Elk Mound boys’ and girls’ teams both won this year’s conference championships in what was some of the closet finishes in the meet’s history.

The Lady Mounder led by runner-up senior Alana Plaszcz unseated reigning champion Glenwood City by a single points 44 to 55. In fact, a mere two points separated the top three teams as Durand finished third with a score of 46.

The boys from Elk Mound beat defending champion Durand 43 to 46.

Durand had the top individual finishers with freshman Madison Sand winning the girls’ 58-competitor race in 20:04 and senior Isaac Wegner topping the boys’ field of 69 runners with a 16:26.34.

The Bulldogs will also be hosting the WIAA Division 3 sectional meet this Saturday, October 20th starting at 11:00am when the boys take to the course. Support your Bulldogs and see if Nathan Corr has what it takes to earn a trip to the state competition.