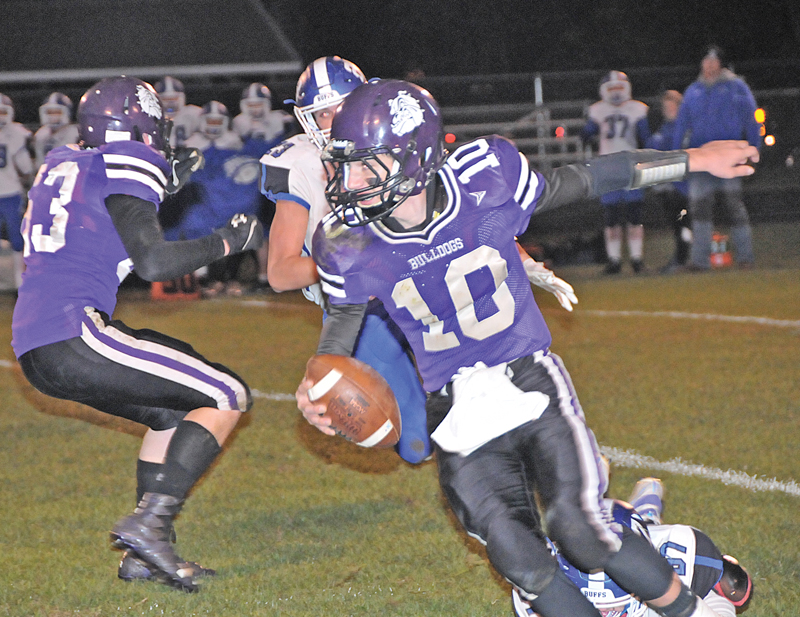 BOYCEVILLE quarterback Connor Sempf scrambled away from Mondovi’s defensive pressure as he tried to gain some positive yards in the first half of the Bulldogs’ homecoming game against the Buffaloes last Friday. Boyceville lost 67-38. —photo by Carlton DeWitt

BOYCEVILLE — The Boyceville Bulldogs marched themselves onto Evenson Field September 28 to celebrate homecoming knowing that they had a tough assignment.

Facing an uphill battle against the once-beaten and league-leading Mondovi Buffaloes,  Boyceville’s football squad dug themselves into a deep hole in the first half and trailed 46-0 at halftime.

Although the game was well out of their reach, the Bulldogs mustered their pride and offense to score five touchdowns – their most productive half of season – following the intermission but still found themselves 29 points short in a 67-38 conference home loss last Friday evening.

“Being it was homecoming night we knew there would be a great crowd on hand, I want to thank all the fans that showed up,” stated head coach Jordan Anderson.

Winless Boyceville slipped to 0-7 for the 2018 season and 0-5 in Dunn-St. Croix games. Mondovi, thanks to Elk Mound’s 21-7 win over Spring Valley that same evening, now has sole possession of first place at 4-0 and 6-1.

The first two quarters proved to be difficult for the Bulldogs as the Buffaloes ran rampant.

Tanner Marsh of Mondovi ran for the Buffaloes first two scoring touchdowns within the opening five minutes of the game but an unsuccessful kick and two-point conversion try left Mondovi in front 12-0.

Another four minutes would tick off the game clock before Mondovi again reached the end zone. A 20-yard pass from Brennan Christopherson to Carter Johnson and another unsuccessful kick by Raith Bauer made it to 18-0 at 3:59 of the first.

Brandon Wagner was next to score for the Buffaloes in the first quarter, adding six off a 15-yard pass from Christopherson, this time Bauer’s kick found it’s way through the uprights pushing Mondovi’s lead to 25-0.

Like the first 12 minutes of the contest, Boyceville was unable to score any points in the second quarter.

Unfortunately, Mondovi scored 21 more unanswered points off of two rushing touchdowns from Tanner Marsh and Logan Uschan and a 50-yard punt return by Marsh as the score grew to 46-0 at the break.

“Mondovi started fast and put us away before we ever had a chance,” explained Anderson, “it was a positive sign that we scored 38 points but they all came in the second half.”

During the third quarter, the Bulldogs and Buffaloes went back and forth on scoring plays with Boyceville striking first early on a 37-yard pass from Connor Sempf to Brenden Sempf and with a successful two-point conversion the score was 46-8.

Mondovi answered back with a four-yard rushing touchdown by Cade Brenner and a successful kick by Chandler Pichler to push Mondovi’s lead to 53-8.

Brendan Sempf scored with a 70-yard reception from Connor Sempf late in the third quarter with a successful two point conversion run by Trevor Hollister brought the score to 53-16 with 3:45 left in the quarter.

Mondovi would not be held down for long as just over a minute later the Buffaloes scored on 34-yard rushing touchdown by Daniel Palubicki and the extra point kick from Nathan Pelke had the Buffaloes up 60-16.

The Bulldogs started the fourth quarter off strong as they managed to put up three scoring drives – 4- and 35-yard runs by Ty Gunlach and  58-yards pass to Bailey Danovsky – and hold Mondovi to only one touchdown ending the game 67-38 in favor of the Buffaloes.

Connor Sempf fought hard for the Bulldogs,  passing for 323 yards on 15 completions, Ty Gundlach had 80 yards rushing and Brendan Sempf led the offense with 135 yards receiving.

“We have two weeks left and our goal is to finish off the season with two wins against Durand and Cadott,” Anderson said.

The Bulldogs travel to Durand to take on the Panthers this Friday, October 5 and finish out their season hosting Cadott for a non-conference tilt on October 12. 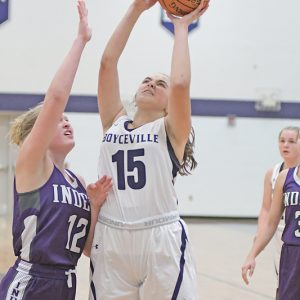 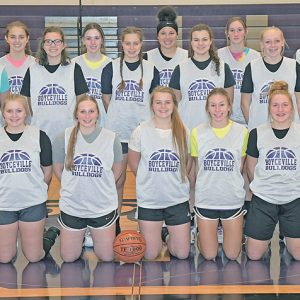