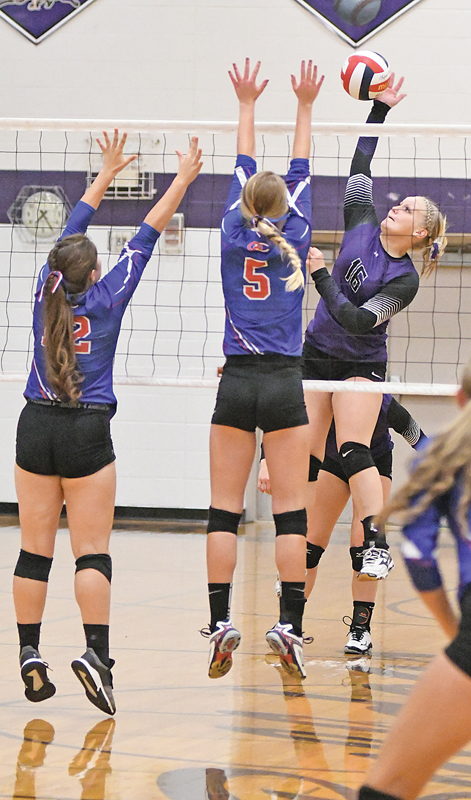 ELMWOOD — With Taylor Grambow out for the year with an ACL tear, the Bulldogs’ volleyball team has worked to keep their sets close no matter who they were matched up against.

Traveling to Elmwood on September 25 the Bulldogs suffered a defeat at the hands of the Raiders in four sets losing 3-1.

But Boyceville found the winning combination against the Hilltoppers as it rallied from two sets down to beat its arch rival in a September 27 home match that went all five sets.

The Bulldogs’ head coach Keri Peterson explained that her team gave away too many easy balls during their match against the Raiders with scores of 21-25, 27-29, 25-23 and 26-28.

“We didn’t block well enough which forced us to dig the ball a lot more and we made too many dig errors,” explained coach Peterson.

Leading the defense with eight digs was Bulldogs player Hannah Johnson followed by Jaida Peterson and Amber Retzloff with seven digs a piece.

A positive note for Boyceville as a team, it earned 12 points off of ace serves, Jaida Peterson had four and Kady Grambow finished with three.

“We needed to put the ball down for a kill more than we did, offensively we didn’t get the job done,” stated coach Peterson.

The Bulldogs welcomed the rival Hilltoppers to the Dog House last Thursday, September 27 and the greatest part of it all, explained Peterson, was every kid on the bench contributed to their come-from-behind win.

“We had tremendous support from our fans too, which was awesome, we definitely want to thank them for helping us bring energy to the game tonight,” Peterson commented.

Hannah Johnson and Jaida Peterson teamed up for 37 kills against the Hilltoppers, playing well in the back court and getting the ball to the Bulldog’s setter.

Leading in assists for Boyceville was Emma Ouelette with 22 and Amber Retzloff contributed 19 assists and ten digs on defense.

“We had some great serves from Emma Bygd and Jaida Peterson in set five which helped us finish the match with a win,” stated coach Peterson.

With only nine service errors as a team, the Bulldogs pulled off 18 points from ace serves. Kady Grambow and Amber Retzloff both had five aces a piece.

Boyceville faced up against Mondovi on last night, October 2, at home, before heading to Plum City next Tuesday, October 9. The Bulldogs return home to take on the Durand Panthers in their final regular-season and conference match on October 11.

Bulldogs move into WIAA playoffs with victory over Clear Lake